ANTI-CANCER RECIPES – EVERYTHING YOU NEED KNOW

Our anti-cancer recipes are made with healthy plant-based ingredients focusing on anti-cancer foods and antioxidants such as lycopene and anthocyanins. In our kitchen, we develop food recipes with:

Why anti-cancer recipes for prevention?

Why are we talking about this? Because, research suggest that approximately a THIRD of all cancer cases can be prevented through the intake of a plant-based anti-cancer diet. The bigger the consumption of different berries, spices such as turmeric and ginger, cruciferous vegetables, green tea, fruit, citrus, grapes, tomatoes, beans, grains and seeds the better chance you’ll have to stay healthy.

Our recipes are not only anti-cancer

Following a plant-based nutrition has been reported to offer protection against some of the 15 diseases causing most deaths globally.

In a study, those who followed a relatively active lifestyle such as walking on a daily basis for just two weeks and ate a wholly plant-based diet were able to suppress the growth of cancerous cells and completely annihilated 20-30 percent of malignant cancer cells in the blood.

Why plant-based in anti-cancer recipes?

Obviously, everyone wants to know why research and studies for over a century seem to warn people against the intake of animal-based diets or at least cut animal products intake. A study that sought to find this out concluded that plant-based foods were able to suppress cancer growth through the decrease of IGF-1, growth factor 1, which is much like insulin as a result of reduction or halting animal protein intake.

A hormone that helps with cell growth, IGF-1 is found in blood and the higher the hormone the higher rates of cancer development. Also, studies have also concluded that only a complete plant-based diet is able to offer anti-cancer effects such as a vegan diet, considering that those vegans who took animal products such as eggs were found to have levels of IGF-1 and thus lost the protective effect only plant-based foods offer.

At the same time, animal products hugely consumed by many have substances known as HCAs (heterocyclic amines) formed when meat such as poultry, fish, pork and beef is cooked under very high temperatures. In fact, scientific research has collaborated this since 1939 when it was found out that cancer in animal products is present due to the different high-temperature methods of cooking such as baking, grilling, frying via pans and roasting.

So let’s dig a bit deeper.

What are some of the best anti-cancer foods out there?

We focus a lot on carotenoids in our anti-cancer recipes. Carotene-rich produce and compounds have been well noted for their anti-cancer effectiveness. Fat soluble, carotenoids are known for their antioxidant properties with many convertibles into the highly important vitamin A, such as beta carotene, beta cryptoxanthin and alpha carotene. Carotenoids that do not contain vitamin A include lycopene, zeaxanthin and lutein.

Carotenoids are largely two in nature: carotenes and xanthophylls.

Lycopene and beta carotene are the most significant carotenes. The intake of beta carotene rich foods in a typical diet has been found to help in decreasing cancer risk. Beta carotene uses its antioxidant nature to inhibit free radicals that destroy cells and stimulation of the inter-cells gap-junction connection to prevent cells from growing or being transformed while improving defense systems in cells and cultivating gene regulation through retinoic acid formulation.

Beta carotene is largely found in dark green plant-based foods such as leafy vegetables, yellow colored fruits and vegetables such as dried apricots and carrots. Different studies between 2000 and 2012 have ascertained that beta carotene taken in normal meal plans containing the antioxidant was effective in lowering the risk of diverse cancers such as bladder, breast, ovarian, cardiac, oesophageal, endometrial, cervical and breast cancer.

Note that unlike other types of foods, carotenoids sources actually increase their nutrients strength once chopped and cooked.

If oxidants are produced in a higher concentration in the human body the result is extensive oxidative damage to diverse biomolecules such as proteins, DNA and lipids resulting in high pathogenesis and increase in serious human diseases such as cancers, cardiovascular diseases and increased aging.

Phytochemicals, particularly antioxidants come in handy in such cases and help ensure these and other chronic diseases are treated and prevented. One of the proven ways of adding these highly needed antioxidant phytochemicals is through the consumption of vegetables and fruits with high content of antioxidants, which increases their anti-oxidative capacity in plasma and serum. For instance, in a study, increased antioxidant serum capacity was found to increase considerably with the intake of such foods as spinach, vitamin C, strawberries and red wine among elderly females.

With so many antioxidants out there, anthocyanin and lycopene are key in cancer risk reduction. Water soluble, this vacuolar pigment usually appears in different deep colors as a result of pH, such as black, blue, purple or red. Anthocyanin has been well enumerated for its anti-cancer, anti-obesity, anti-diabetic, antimicrobial, and anti-inflammatory properties, including well documented cardiovascular diseases prevention.

Foods highly rich in anthocyanin include:

A carotenoid, lycopene is a major bright red antioxidant notable for its huge effect on cancer, diabetes and cardiovascular diseases.  Lycopene serum and lycopene intake have also been found to have effect in different cancers, such as cancer of the gastric, tongue, colon and breast through the effect of inhibiting or stopping the increase of cancerous cell production as well as arresting cell cycles and increasing the apoptosis of cancer cells, particularly breast cancer ones.

Lycopene is best consumed in an anti-cancer diet containing foods such as:

In addition, green tea polyphenols and pro-anthocyanidins present in grape seeds have also been found to be effective protection against skin cancers caused by UV radiation, as well as working to reduce oxidative stress, damage to DNA and immune response suppressions.

Quercetin, another critical antioxidant is known for its effectiveness in cancer prevention and also recommended for the suppression of viral infections, chronic fatigue, asthma, schizophrenia, peptic ulcers, cataracts, hay fever and diabetes as well as in the treatment of severe prostate infections. Quercetin also enhances athletic performance and boosts endurance in workouts.

Also a polyphenol and a plant flavonol antioxidant, quercetin is largely found in grains, seeds, leaves and vegetables such as:

One of the best anti-cancer foods – Lignans

If a doctor was to be asked to indicate the exact anti-cancer foods you should take for specific cancers such as breast cancer, she would probably reiterate time and again you consume as much lignans as you can. Essentially, lignans are phytoestrogens with stellar, well studied anti-cancer effects. These include Chianti and flaxseeds, which have been rated highly as quality choice for those who’ve gone through breast cancer, particularly among postmenopausal women, according to the Journal of Clinical Oncology.

Since they’re naturally found in plant cell walls, lignans are one of the easiest foods to add into any diet. More than any other, linseeds aka flaxseed has been noted to be the richest lignans food, which is also rich in omega-3 fatty acids and liked for having over 100 times extra lignans content than other lignans rich foods, followed by sesame seeds.

Due to their phytoestrogens nature, lignans have been effective in the modulation and suppression of endogenous oestrogen effects and thus have been largely used as efficient therapy for women suffering breast pain during menstruation.

Essentially, foods rich in lignans include:

It’s worth reiterating the huge body of scientific evidence in support of lignans in helping lower or protect women from breast cancer. Those already suffering from the cancer actual show increase in survival rates with more lignans consumption; the intake raises endostatin protein in blood, which starves off cancerous tumors the supply of blood they need to grow.

In a study by National Cancer Institute carried out in 2010, the daily intake of about two tablespoons of linseeds/flaxseeds that had been ground well was found to reduce the risk of getting breast cancer among women under the highest risk.

While spices and herbs have been largely synonymous with human life for millennia, it’s in recent times that their antioxidant effects and anti-inflammatory properties, including the ability to modulate immune systems have been well ascertained. According to tens of studies over the years, spices and herbs have been found to help in the treatment and prevention of such cancers as cancer of the prostrate, cervical cancer, cancer of the colorectum, stomach cancer, breast cancer, liver and lung cancers.

According to the Academy of Nutrition and Dietetics, the process of getting juice from vegetables, fruits and other plant foods, juicing, is one of the healthiest way of adding lots of much needed fruits and vegetables into your diet. Essentially, this type of anti-cancer juicing isn’t what you use to meet the required nutritional requirements but a boost to an already proper and healthy diet. Juicing is a wonderful way of consuming much needed anti-cancer plant-based foods.

Juicing is perfect because:

To make the most of anti-cancer juicing you should ensure vegetables are more than fruits. For instance, there are experts who advise that you add a fruit or two to sweeten your juice while the rest of the ingredients are largely vegetables.

Juicing allows your body to attain a better PH balance, where the body becomes more alkaline as it should than acidic. Due to processed, fatty foods, sweets and animal proteins people consume the result is over-acidity. Your immune system is thus weakened and fatigued as parasitic yeast overgrows, commonly termed as Candida albicans, which motivate cancer cells to develop. By following anti-cancer juicing the body is able to re-establish its healthy PH balance removing the risk for developing cancer.

Add more fruits into your diet

Whether you’re undergoing cancer treatment such as radiation or chemotherapy or you would like to eat fruit to help prevent cancer – it is good to know effective anti-cancer fruits. These fruits ensure you’re able to supply your body with antioxidants, minerals and vitamins your body requires at any given time.

In a nutshell, some of the top anti-cancer fruit types out there include:

As already discussed here, vegetables are a significant source of nutrients and lots of anti-cancer molecules. Even so, some such as cruciferous vegetables filled with zeaxanthin, lutein and beta-carotene goodness offer lots of minerals, fiber, folate and vitamins such as vitamin K, vitamin E and vitamin C.

These types of vegetables provide glucosinolates, a sulfur compound broken by the body into isothiocyanates, thiocyanates, nitriles and others such as indoles considered to be highly effective anticancer compounds. They stop cancerous cell development around the stomach, lung, liver, colon, breast and bladder.

Believe in power of plants

We believe food should not only nourish your body but also taste delicious and be easy to make. We are here to help you in the kitchen, overcome your challenges and fears, and encourage you to eat more plant-based and anti-inflammatory.

This book focuses on purely plant-based and anti-cancer recipes inspired by dishes from around the world. Buy our ebook here – https://payhip.com/b/APBI 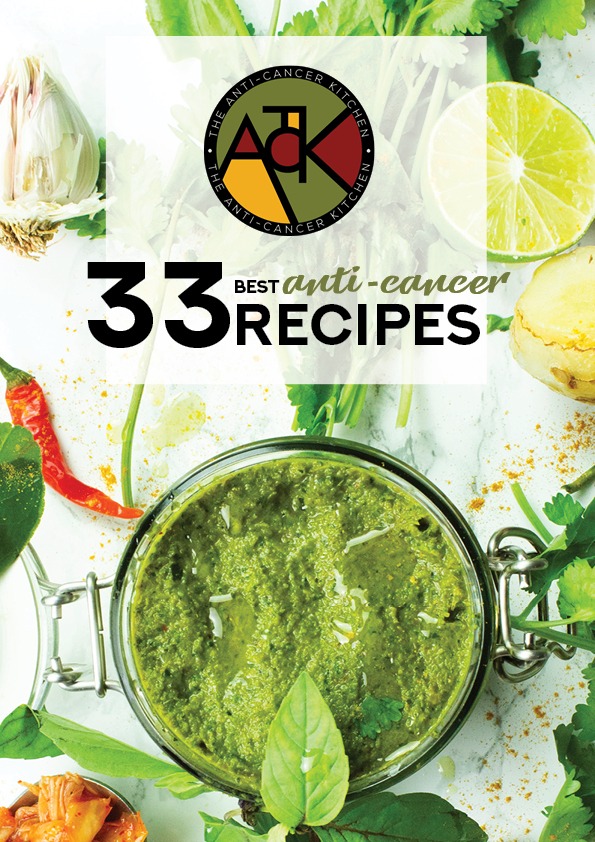 Browse anti-cancer recipes on the blog