Watermelons are delicious and this juice recipe with mint and lime is refreshing, hydrating and aromatic. This fresh watermelon juice is full of heart-healthy vitamins and minerals including vitamins A, B6, C, magnesium and potassium.

Juicing watermelon is easy. You can either use a centrifugal juicer like in this recipe or a blender. If you use a high-speed blender, we would suggest straining the watermelon juice. You don’t have to, but it gives it a better clarity and viscosity.

Juicing is a brilliant source for getting as many vitamins, minerals and antioxidants into your body – quickly. When you juice fruit and vegetables, the juice gets extracted and the pulp and fibre are left behind. The juice and its nutrient content can then be absorbed straight into the body.

Believed to have originated from West Africa, Citrullus lanatus or watermelon has natively spread from West and North Africa, Central Africa to West India. Archaeological evidence shows watermelons were grown around 2nd Millennium BC, there are even pictograms of watermelons from inside Pharaoh Tutankhamen’s tomb.

Around the 7th century, the flowering plant was being grown in India and is said to have arrived in China around the 10th century. Today, the sweet, juicy fruit is eaten around the world with China producing over 67 percent of all global watermelon produce.

Nutrient-rich
Loved for its low-fat content, watermelon is largely 6 percent sugar and 91 percent water. The fruit contains diverse nutrients, of which 10 percent is vitamin C. Pulp from the melon is notable for its lycopene and carotenoids content while the rind contains citrulline (an amino acid). In essence, a slice of watermelon contains different nutrients, such as: 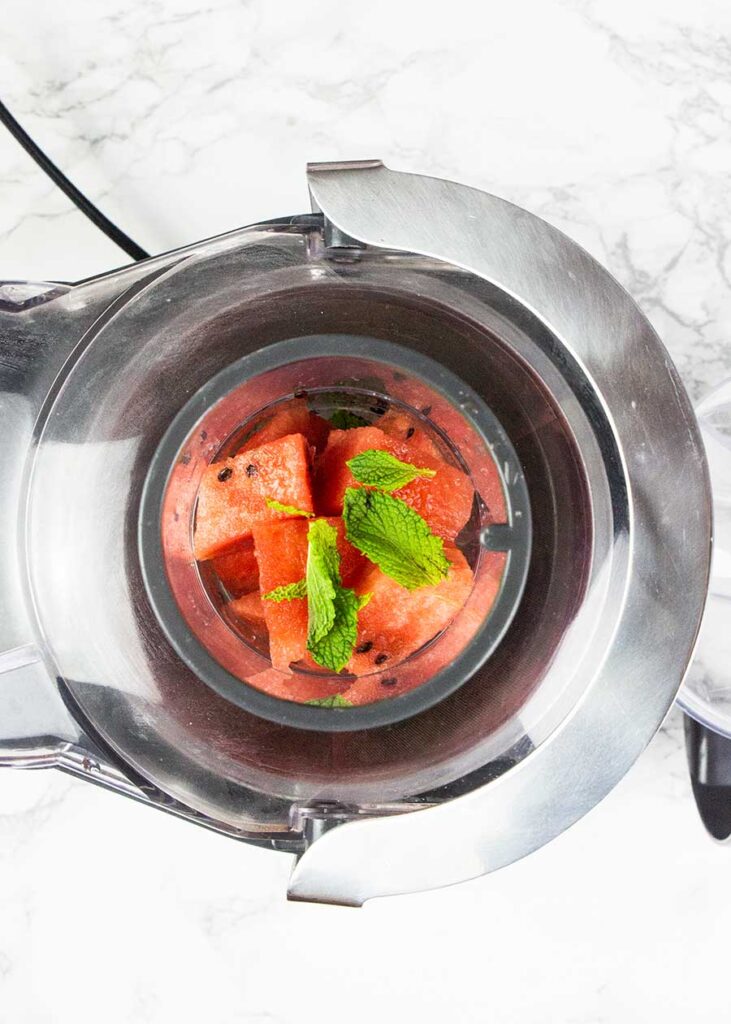 Enhances heart health
Courtesy of citrulline, an amino acid, watermelon improves blood circulation while reducing blood pressure. In addition, lycopene in watermelon is beneficial to the heart and its consumption is associated with reducing the risk of heart attacks.

In a study, it was observed that extracts from the fruit reduced high blood pressure in overweight adults as well as arterial stiffness courtesy of arginine (enhances blood circulation and reduces intake of excessive fat) and citrulline levels in a watermelon.

Adding watermelon or watermelon juice to a healthy lifestyle with physical exercise, a balanced diet, and less saturated fats will help lower cardiovascular problems whilst improving your overall body health.

Cancer prevention
Antioxidants are important for cancer prevention as they help fight free radicals in our body cells. Watermelons are heavily endowed with antioxidants which could help prevent and reduce cancer tumours. One of these very important antioxidants is lycopene, which is clearly visible on the fruit due to its reddish pigment.

As such, the best lycopene-loaded melon is one with a bright red, supple, and ripe interior. A seedless one also contains extra lycopene. According to various studies, lycopene is strongly linked with lowering prostate cancer in men.

Highly hydrating
One of the obvious benefits of watermelons is their hydrating ability. With about 91 percent water, melons can give you the required 20 to 30 percent body fluid from food only. The fruit also contains a sufficient offering of electrolytes handy in lowering strokes, especially due to its level of potassium and magnesium usually lost during physical activities. Taking melons after a workout replenishes magnesium and potassium while ensuring that bodily muscles loosen up and contract as required. 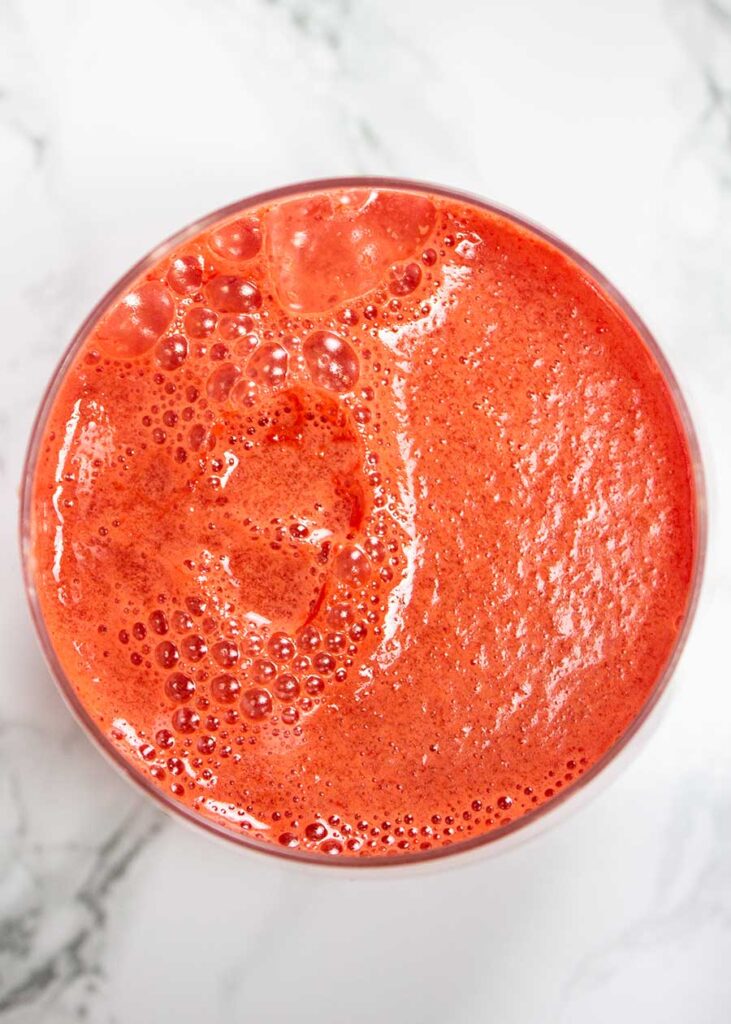 Reduces inflammation
The presence of lycopene gives melons a unique anti-inflammatory ability absent in most fruits. Apart from being an effective antioxidant that modulates and deals with free radicals, lycopene helps deal with diverse inflammations.

Also, choline in the fruit adds an anti-inflammatory advantage, especially for those affected by chronic arthritis. In cases of systemic inflammation that brings about cellular stress and damage, watermelons offer sufficient nutrients and minerals that help to deal with it.

Mere air pollution, inflammations and diseases, stress or smoking that inflames the body worsen systemic inflammatory complications that watermelons, among others, help to heal and boost the body with better immunity.

Aids in AMD (Age-associated Macular Degeneration) cases
Lycopene in watermelon jucie has been found to help with macular degeneration associated with ageing. The antioxidant is actually a component of the eye that makes sure it doesn’t get inflamed or suffer oxidative damage.

Macular degeneration can cause blindness and intake of melons help those with the condition to reduce its impact. Intake of lycopene in melons helps to prevent the degeneration together with other foods in a typical balanced diet.

The fresh taste of mint
Mint is a herb that has a wonderful flavour and aroma and when added in small amounts it can pair beautifully with fruits and elevate the overall flavour quite dramatically.

Peppermint originates in Europe and is easily cross-pollinated which produce exciting hybrids. There are over 25 different types of mint to experiment with from spearmint to lemon mint and even chocolate mint. There are also many ways to use mint which then can be used in flavourings, perfumes as well as toiletries, a cooling mint shower gel, for example, is amazing to refresh the senses in the morning, so adding a little to a morning juice will rejuvenate the senses too.

It is the aerial or outer parts of the mint that is used for the flavour, that is the flowers which can be steamed to produce mint oil and the leaves also be steamed, infused or cut directly into food.

The main essential oil is menthol which is a volatile oil that has numerous health benefits. The essential part refers to the oil itself which encapsulates the main scent of the plant and the volatile aspect refers to the fact that it can evaporate easily at low temperatures (which is why they are so easy to detect on the nose) It is these oils that can invigorate the senses giving you a more alert state and less fatigue.

Studies have suggested it can also help brain function too as they are exceptionally anti-inflammatory. There are other plant compounds in leafy herbs such as mint that also have health benefits such as the antioxidant benefits that come from the polyphenols known as flavonoids. These are plant compounds that can be responsible for a plant’s colour and help the plant to survive against the cold and other antagonists such as pests and fungus. It is these compounds that when consumed (even in the small quantities that you would have by adding mint to a recipe) will help with eradicating the harmful effects of free radicals in the body that if not neutralised quickly enough can trigger mutations at a cellular level which can then lead on to cause chronic diseases such as cancer.

Some other health benefits of mint have shown it to be beneficial for digestive problems, have an antispasmodic action and also effective for pain relief.

If you ever think that you have a recipe just right then maybe think again. There is always a little room to add a herb such as mint to add more than just flavour. 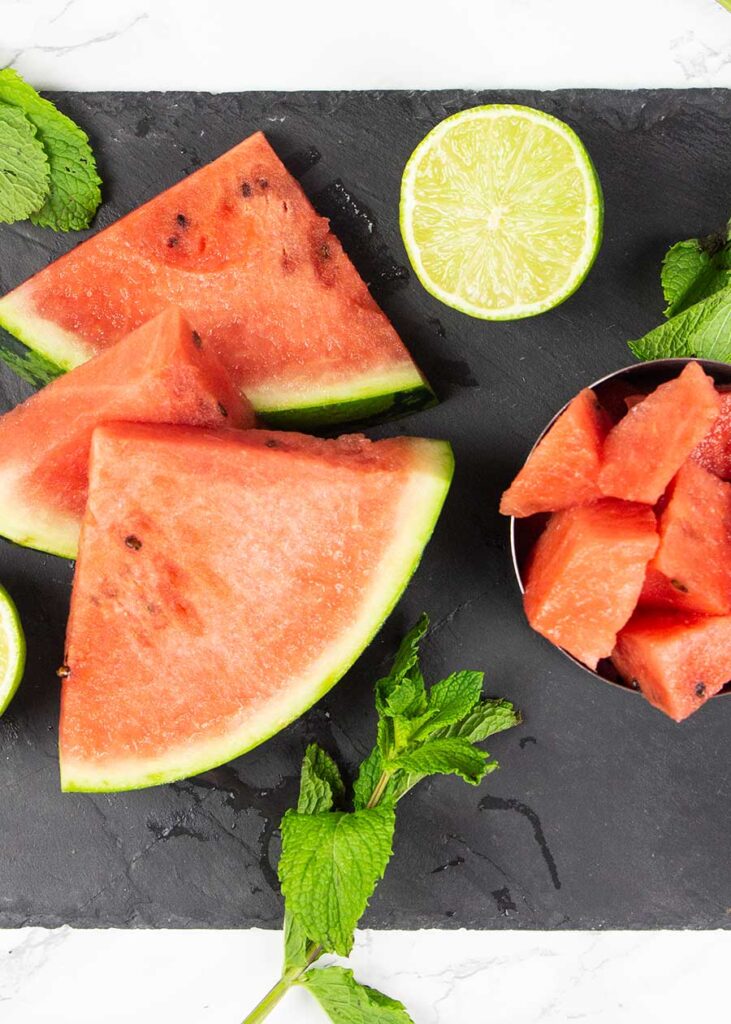 One of the best antioxidants that is abundant in fruits is vitamin C. Citrus fruits such as lemon, limes and oranges contain a high amount which then helps the body with hundreds of metabolic reactions, one of which increases the production of collagen which is a major structural protein that is essential for our cells repair, especially in bones, teeth and our skin which can help with anti-ageing.

Citrus fruits such as limes are a good ingredient to form part of an alkaline diet. Even though citrus fruits are high in citric acid they are part of a food group that will alkalize your body. This is because when the body converts food into energy there is a chemical reaction that leaves behind metabolic waste and this waste is either acidic, alkaline or neutral. When the residue or ash is left behind whatever its Ph level is will affect your body’s acidity. The more acidic you are, studies have shown the more susceptible you are to illness and disease. The more alkaline you are in moderation, therefore the more protected you are to potentially lower the risk of cancers and other acute illnesses.

Vitamin C also regenerates vitamin E and as such will increase the body’s defence against oxidized cholesterol that is associated with the hardening and furring up of arteries. Studies have also suggested that people with the highest intakes of vitamin C are less likely to develop certain cancers.

People who do not consume many fruits have a  higher susceptibility to colds and coughs, poor healing, prevalence to bruising. A lack of vitamin C can also result in hair loss, dry lips, inflamed, bleeding gums and lethargy. Juicing is one of the most effective and quick ways to maximise on your vitamin C consumption. And one last thing, you can never have too much vitamin C as you will just pass right through you if you have enough already.

Have you made this delicious watermelon juice recipe? 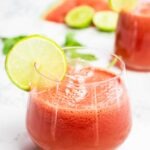 Wash all the fruit.

Cut the watermelon straight through the middle to use one half, save the other half for another time.

Remove the lime skin and push the fruit through the juicer. Alternatively, cut the lime in half, crosswise and use a fork or citrus juicer to extract the juice and pour into the watermelon juice. Give the juice a good mix and serve immediately.