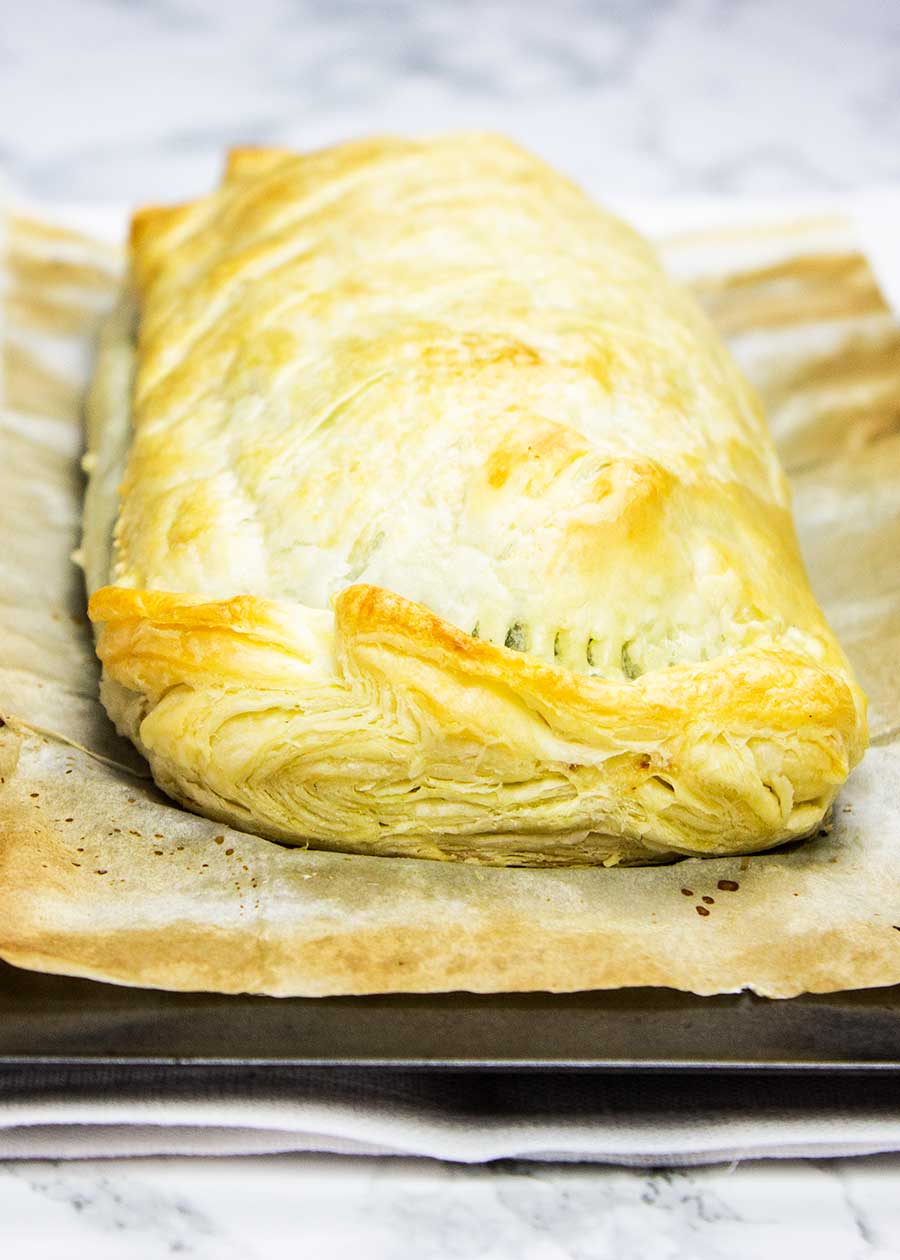 This is certainly a dish of ambiguous origin, whether the original Beef Wellington was made for the first Duke of Wellington made up of a fillet in pastry with the addition of his favourite fois gras and mushroom pate (or duxelles), which is definitely similar to the French filet en croûte but anglicised or a recipe created for a civic reception in Wellington New Zealand in the early 1800’s. Whatever its beginnings it’s most certainly one of the most celebrated recipes in English cuisine today.

Obviously, mushrooms wrapped in pastry is a well-loved and often re-imagined version of this classic. It’s not that it is too simple or plagiarism it’s just that when the first person who supplemented mushrooms for beef it would have tasted so good there would have been no point in trying to experiment with further variations.

Of course, there are other variations for plant-based (vegan) Wellingtons such as a seitan Wellington or Aubergine Wellington, we’ve even created a very clever version of a potato rösti which gives an excellent texture and flavour for a meat substitute but the mushroom works just perfectly and with no way near the preparation needed otherwise. So, simplicity meets timeless hearty elegance. However, don’t be fooled into thinking that this is so simple with what seems like millions of similar recipes that just anyone will do.

With our recipes, not only must the ingredients be healthy and diminishing known carcinogenic produce, (the mushrooms here are full of cancer-fighting antioxidants in selenium) the end result must be good. One of our tenets is to protect our “terroir” as David Servan-Schreiber wrote in Anti-Cancer, A New Way of Life book. Terroir is the environment you put your life in. We have three according to the book – our diet, exercise and our state of mind. 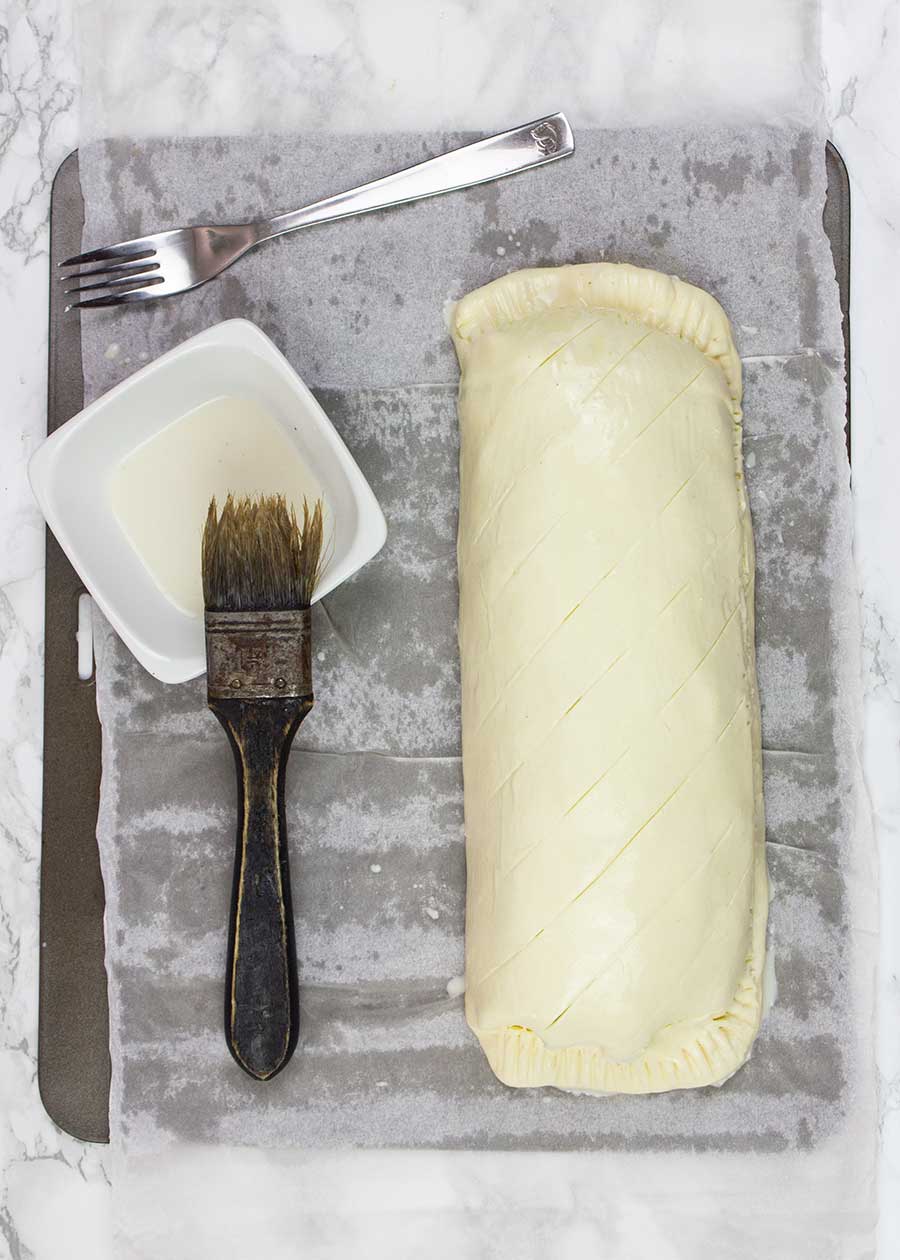 This means the food you eat must not only be healthy but enjoyable too. It’s surely not enjoyable to eat bland, textureless food all the time. In a non-plant-based diet, meat obviously provides a texture that is hard to re-create for the seed-foodie which is why we try so hard to create dishes that utilise all the textures we believe should be commonplace.

In this mushroom Wellington recipe we prepare the mushrooms in a multitude of ways that add bite, add carefully selected ingredients to reduce sogginess and introduce other ingredients to add health benefits, extra taste and texture. For example, the chestnuts which old Chinese medicine says is used in the autumn and winter to stave off illnesses is also a tonic for your kidneys. Of course, they are also very festive which is no coincidence as this mushroom Wellington is often served in households all over the world at Christmas and by the way ours too this yuletide holiday. We also use black kale in this recipe not only to stop sogginess but to increase the antioxidants levels even more. This cruciferous vegetable is one of the most nutrient-dense foods in the world. It is high in beta-carotene, flavonoids, and polyphenols which counteract the oxidative damage in our bodies by free radicals which is documented to be one of the key instigators of cancers.

So, tasty, healthy and not sacrificing any of the heartiness you would be used to in a classic Beef Wellington. Trust us, this is a must for any Christmas table this year.

There are a huge amount of mushrooms to choose from and all offer up a different delicate or earthy flavour or meaty or spongy texture. The health benefits are varied too. The duxelle that sits on top of portobello mushrooms we have opted for a selection of wild mushrooms that are widely available from supermarkets such as shiitake mushrooms, king oyster and girolles. In the case of the Girolles which are an absolute staple in French cuisine, they host an impressive list of health benefits. They (as well as most mushrooms) contain a very important trace element, selenium that is required in your diet. The major role this has to play for our bodies is that it helps regulate normal cell growth and repair and even apoptosis which is the programmed death of abnormal cells. The amount of this cancer-fighting compound in food depends on how much is in the soil the crop is grown in. In parts of the world where selenium levels in the soil are low as much as six times the amount of cancer instances have been reported. Foods rich in this compound include algaes, Brazil nuts, mushrooms and whole grains. 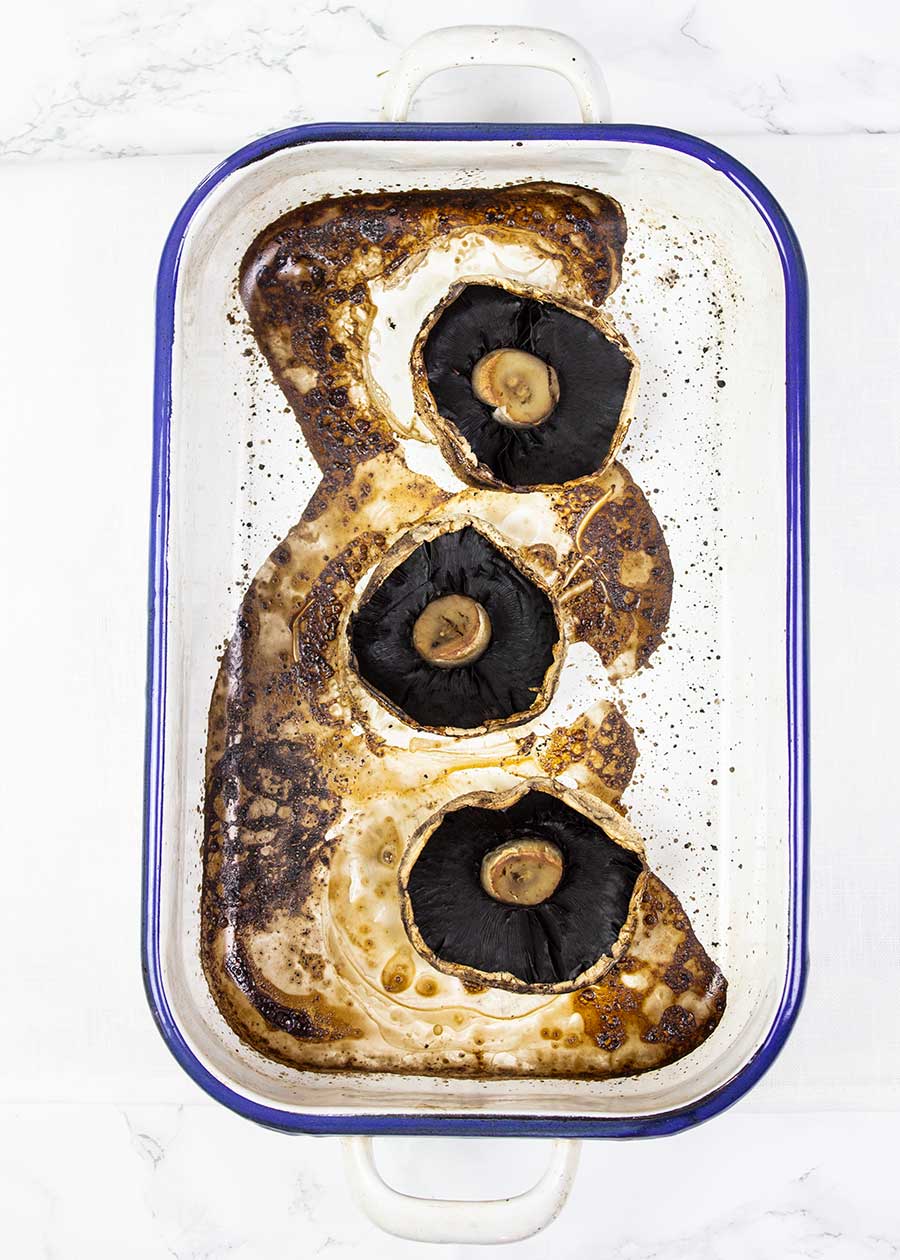 Another amazing compound found in these mushrooms is a compound called Lentinan which studies have shown to have encouraging antitumor effects. The compound derived from certain fungi including shiitake is however used in Japan administered by injection to cancer patients.

Lentinan is a Beta Glucan and if you use a maitake mushroom also known as a hen of the woods, sheep’s head, monkey shelf or signorina mushroom then you’re onto something even better as this mushroom contains a complex version of the beta-glucan known as the D-fraction. The immensity of its ability is clear as it increases the activity of immune chemicals in your body that helps to control white blood cells which in turn leads to increased activity levels of natural killer cells. It is believed that the compound found in this mushroom has greater capabilities of inhibiting tumours than any other mushroom. A mushroom is certainly worth hunting for.

Have you made this mushroom Wellington recipe?

Update notes: This post was originally published on the 11 of November 2018, but was republished with new photos, health benefits information and step-by-step in August 2020. 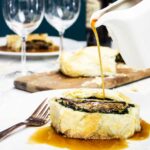 Put the portobello mushrooms in a roasting tray stalk side down and put under a very hot grill for 10 minutes. 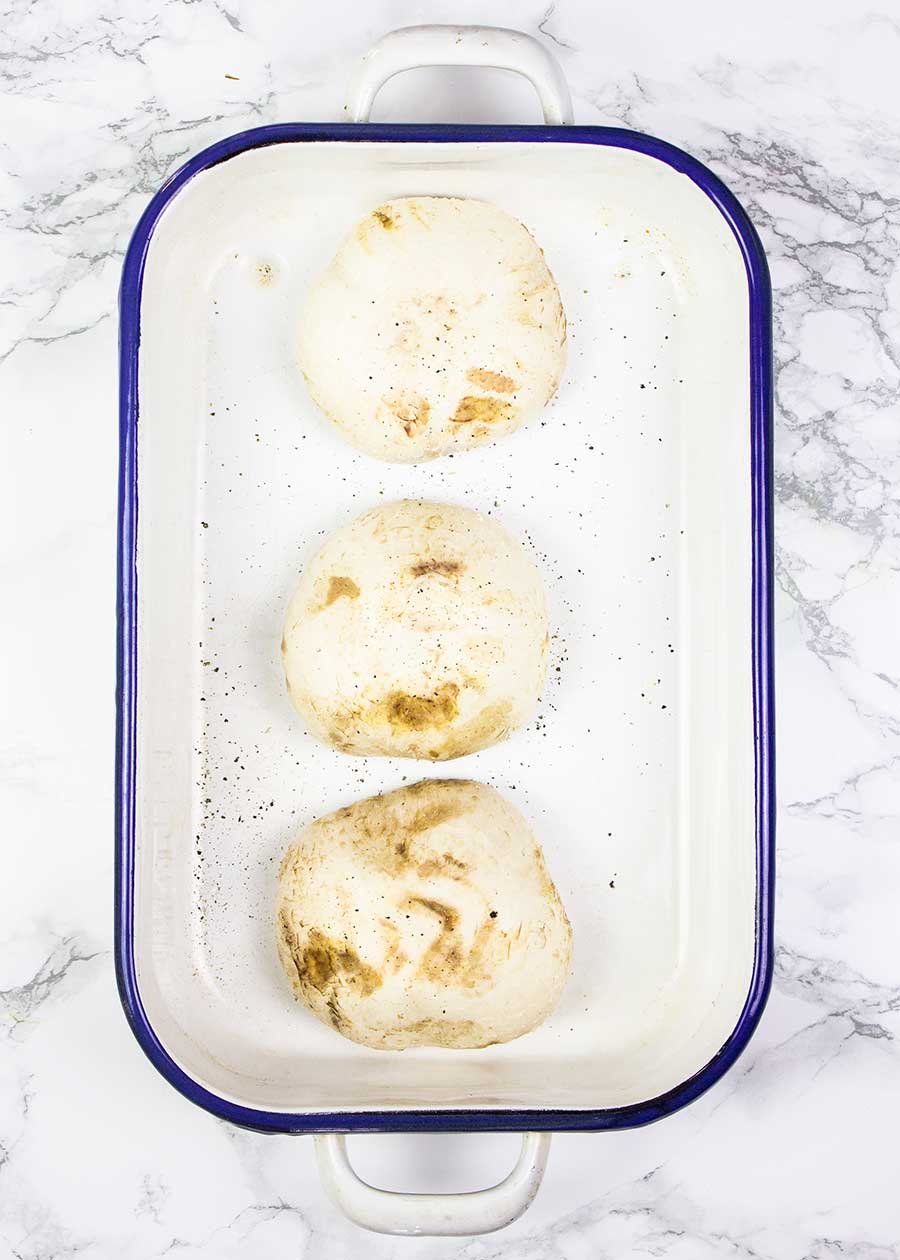 Drain off the liquid and reserve then place the mushrooms back under the grill for another 5-8 minutes. Remove to cool.

Boil the kale in some salted water for 5-6 minutes and drain and set aside to cool. 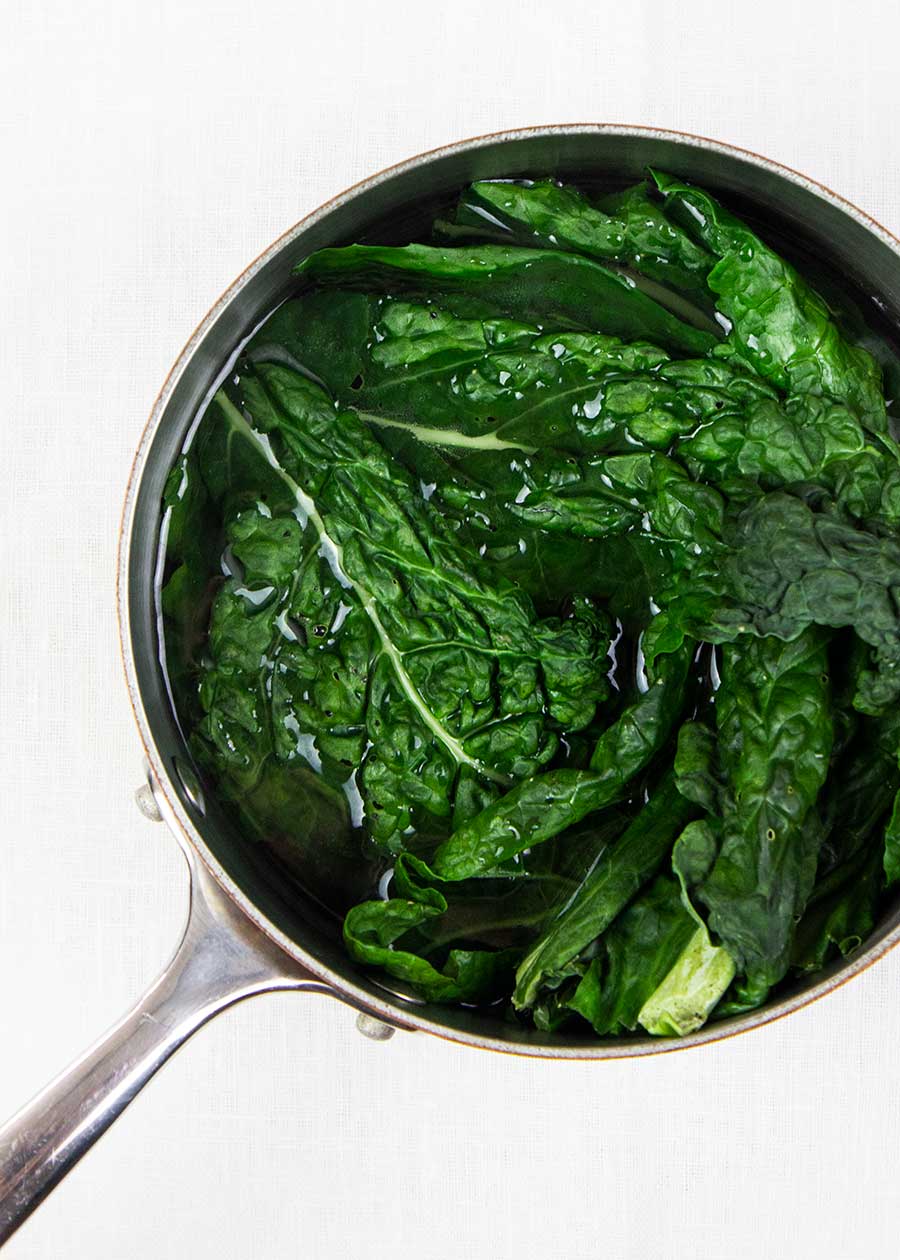 For the Duxelles: Put some olive oil in a pan and on a high heat fry the onion until soft. Add the nectar and soy sauce to caramelize the onion. Add the chopped exotic mushrooms and herbs then pour in the wine and reduce the liquid by half.

Add the chestnuts and a dash of truffle oil to the duxelles and turn the heat down and simmer for 10 minutes.

Remove from the heat and spoon out half of the duxelles and with a blender blitz until smooth. Mix the puree and the chopped mushrooms back together and set aside ready to prepare the Wellington. 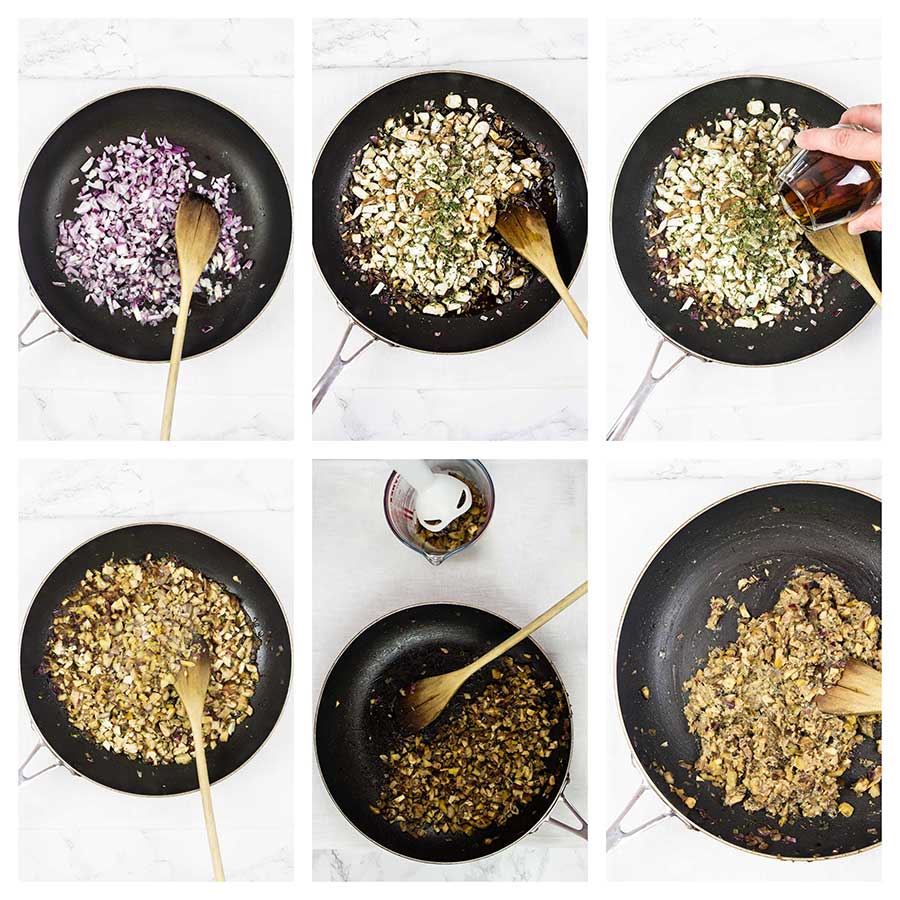 To assemble the Wellington: Roll out the pastry (10 minutes before using) still on the parchment and place the portobello mushrooms going from side to side in the middle slightly overlapping at the edges leaving space at both sides.

Spoon the duxelles just over the portobello mushrooms and lightly press to keep in place.

Place the kale over the top then fold the bottom side of the pastry over to cover. Mix the oil and oat milk (or butter or egg wash) in a separate bowl and brush a little on the edge of the covering pastry. Pull the top side over and stick to the bottom to create a parcel. Neatly fold in the sides and crimp. Lightly score a crisscross on the top of the Wellington with a sharp knife.

Brush the whole parcel with the rest of the oil and oat milk and transfer the Wellington still on the parchment to a baking tray and when ready to cook place in a 200°C/392°F oven for 25 minutes until the pastry is nice and golden. 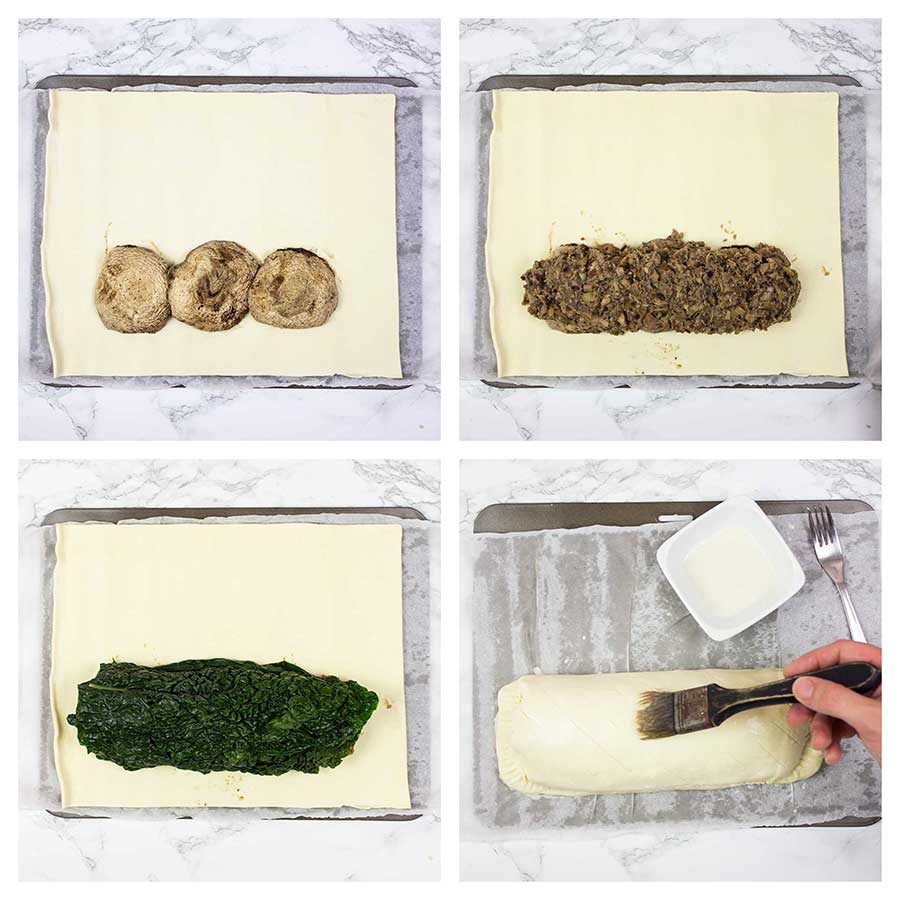 Tip - whatever sauce/ gravy you serve with the Wellington add the reserved liquid from the grilled portobello mushrooms.