Traditionally, minestrone is a vegetable-laden soup that often has pasta or rice included too but the variations are wide. The general line up is chopped carrots, celery, onion and tomato and beans in stock. Pasta or rice is often added as are potatoes, courgettes/zucchini and aubergines/eggplant. However, the soup should be prepared all year round which would then give seasonal produce a pop-up on the shopping list too. 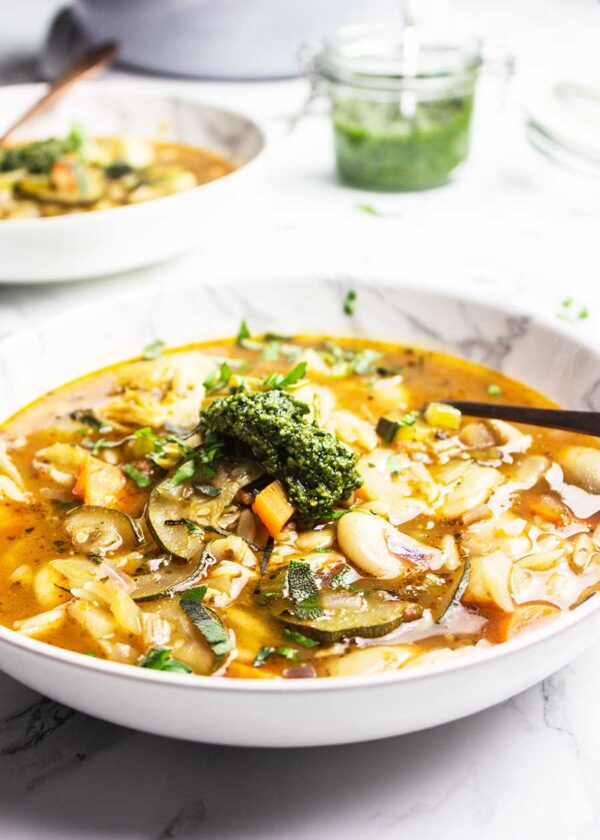 The history of minestrone soup

What is known about what could be argued to be the most famous soup in the world is that it comes from Italy. It comes from humble origins as does so many of the best ever dishes. In Italy it comes from the “Cucina povera”, literally the poor kitchen, as opposed to the “Cucina nobile”, the kitchen of the aristocracy. Dishes and soups such as minestrone started out as broths with whatever was available inside them such as spelt and common vegetables. These ingredients such as cereals, legumes and vegetables were known as “fruges” from which we get the word frugal from but the soup nowadays is nowhere near frugal as it can include pretty much any ingredient you like from smoked meats to truffles. In our chunky healthy minestrone soup we have included some tasty globe artichokes too.

This soup, although it has come a long way from its humble rustic origins also has evolved as more and more ingredients have been unearthed. The most notable and staple addition to this classic Italian soup is potato which of course was completely unknown in Roman Europe. This addition comes after the discovery of potatoes in the Americas in the 16th century. The soup as well as having its seasonal variations also has its regional variations too. One notable great variation is the Genoan recipe that includes a healthy dollop of pesto. It is this recipe that we have really loved and the reason that we have added a simple but rather tasty recipe for a totally plant-based sage and basil pesto too.

Many health organisations and cancer charities such as Cancer Research UK suggest that people undertake certain diets to stave off chronic illnesses such as cancer and to also adopt when going through treatments for such. In a simplistic format, this diet is to maximise on vegetables, grain and legumes and minimise on red meats and many other proteins including dairy. A minestrone soup is full of vegetables, grains and legumes. It (and its many variations) could be considered as one of the perfect meals. In fact, the name itself has derived from the Italian minestrare “to serve” or to be administered such as a remedy. 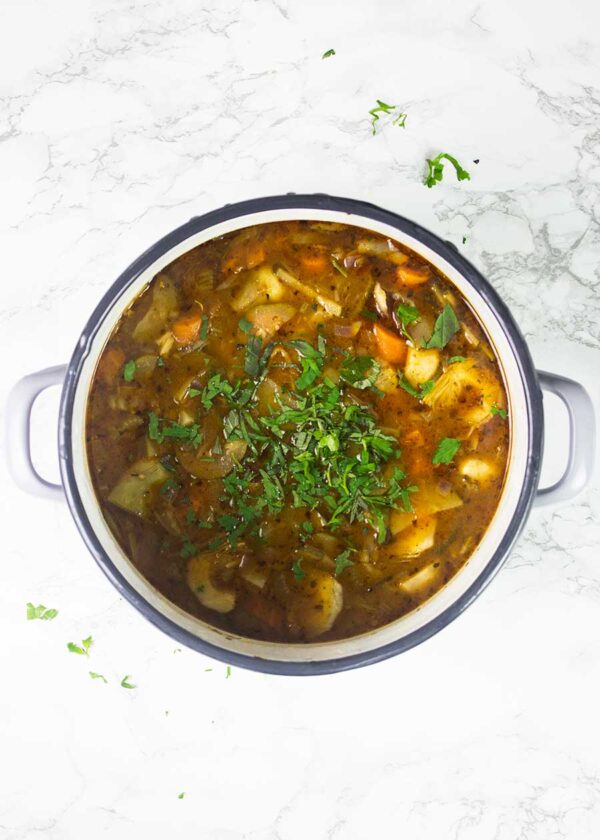 In our chunky healthy minestrone soup recipe, we have packed our minestrone with plenty of chunky and healthy vegetables.

Beans
There are numerous varieties of beans from around the world they are very healthy to eat. We have used butter beans for their size and texture but it has been said that borlotti beans are more traditional. Either way they are an excellent source of protein which is vital to repair and maintain the body and are also full of antioxidants and anti-inflammatories. A high amount of this antioxidant activity comes from the isoflavones in beans which are plant hormones that attach to sugars to form glycosides. When broken down in the large intestine they release their active forms called genistein and daidzein. These act similarly to the human hormones oestradiol although weaker, but they do have a normalising effect on oestrogen levels. That is they act both as an antagonist by blocking the receptors in the body from interacting with strong human oestrogens and as an agonist by stimulating receptors. The benefits of this have been shown to reduce breast cancer tumours.

Carrot
These are amazing ingredients that are being studied more and more in terms of their potential health benefits. Many claims have been made particularly for juicing carrots. They are full of antioxidants which have numerous health benefits. They are especially high in beta-carotene which the body converts into Vitamin A. They are also high in Lutein, which is very good for macular health. It has long been associated with helping you see in the dark! Bright carrots also contain a good amount of lycopene which has been linked to the reduction of cancer cells. Another potent antioxidant, polyacetylenes have been identified as bioactive compounds in carrots that could protect against quite a few different types of cancers.

Onion and garlic
Belonging to the allium genus to which garlic also belongs, red onions, in particular, have been recently associated with protection against cancer cells as they are thought to promote an environment as to which corrupts the affected cells and encourages apoptosis, the regulated death of cancer cells.

Celery
Celery is high in antioxidants including a compound called apigenin. This plant compound has been studied for its potential cancer-fighting properties as it could also encourage apoptosis of cancer cells as well as the potential capability of aiding neurogenesis which is the growth and development of healthy nerve cells. It is this action that helps memory and the ability to learn that also gives you the ability to calm anxiety. Celery is also high in healthy salts that have the effect of balancing blood pressure and help ferry toxins out of the body.

Celery is also high in Kaempferol which is in a class of phytonutrients known as flavonoids that have an exceptionally antioxidant potency. As an antioxidant, kaempferol has been linked to the prevention of chronic diseases such as cancer. Antioxidants balance the effects of free radicals in the body which are formed as the body metabolises the food we eat into energy.

Potato
The staple potato is full of fiber, vitamins, minerals and phytochemicals. Potatoes are a source of vitamin c which is an antioxidant but more importantly a source of Vitamin B, folate which helps repair damaged cells and could potentially prevent cancers. Potatoes are also high in potassium with which a high intake has been shown to reduce heart disease. Potatoes also have the effect (due to the amount of dietary fiber they contain) of making people feel fuller for longer, which is an important part of weight management, potatoes aren’t just full of carbohydrates and therefore must be avoided, they are in fact an important part of your diet. 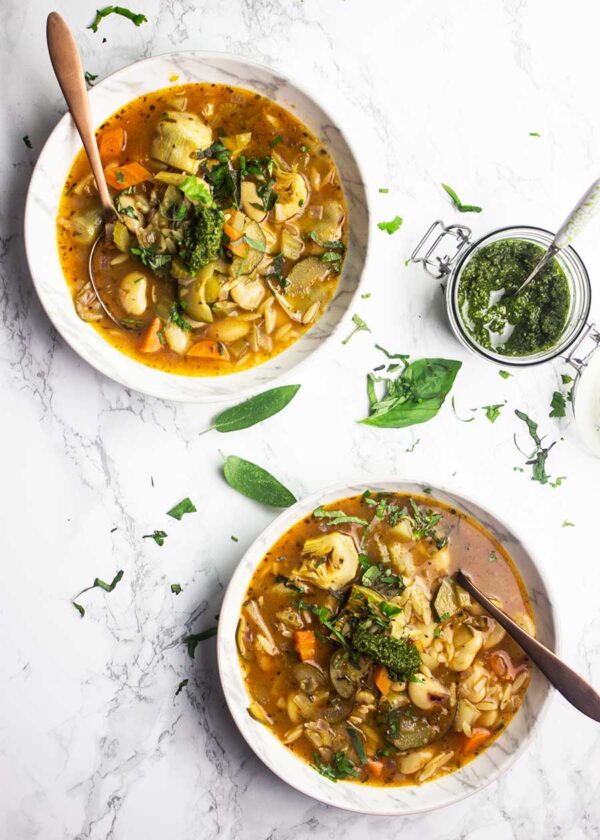 Globe artichokes
Artichoke hearts are the part in the middle of the large flower but they do come in tins so the preparation of them has been taken care of. Even if you can’t find pre-prepared artichoke hearts it’s worth buying them and preparing them for yourself due to how healthy they are. Artichokes are especially renowned for their detoxifying effects and artichoke extract is used as a health supplement. Increasing your consumption of artichokes can have massive positive effects for your health. They aid the body produce bile in the liver which ferry toxins out of the body. They are also high in Vitamin C which is an important antioxidant in all body tissue and is needed for at least 300 metabolic reactions including producing collagen which is a major structural protein in the body. They are also high in vitamin K which is essential for healthy blood.

Artichokes are also high in the plant compounds quercetin, silymarin and gallic acid which have been shown to have tumour inhibiting effects.

Tomatoes
Lycopene which is the red pigment found in tomatoes, is not essential for humans, However studies have suggested that there is a strong link between tomato intake and blood lycopene levels alongside the reduced risk of many cancers. Cooking tomatoes can release up to five times more lycopene than you would get by consuming just raw tomatoes and lycopene is already about three times more potent an antioxidant than Vitamin E.

It has been studied that consuming just one serving of tomatoes can reduce oxidative stress to our bodies by as much as 50% within one day.

Courgette / zucchini
This is another vegetable that contains a whole host of antioxidants such as lycopene, beta carotene, and lutein. However, it consists mainly of water and as such is a great vegetable to aid weight management. Courgette extract is being researched for its potential anti-cancer capabilities but more studies are needed.

All in all soups are especially good at helping you cram pack your diet with as many vegetable grains and legumes as possible. With just one portion of a good soup such as chunky healthy minestrone increases your chances of meeting your five a day minimum criteria. Serve it alongside a nice wholegrain hunk of bread and enjoy and put a large dollop of homemade pesto in the mix too. Enjoy.

Other delicious soup recipes on the blog

Have you made our chunky healthy minestrone soup recipe? 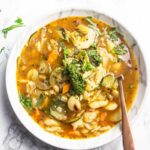 Heat the oil in a large saucepan and add the onion, celery, carrot and garlic, and cook over low heat for 5 minutes.

Add the potato and zucchini/courgette and stir fry for 3 minutes. Add the beans, tomatoes and artichoke hearts and fry for a further 2-3 minutes.

Pour in the stock, stir and place a lid on the pan. Turn down the heat and gently simmer the soup for 35 minutes.

Meanwhile, add all the pesto ingredients in a blender and process until smooth. 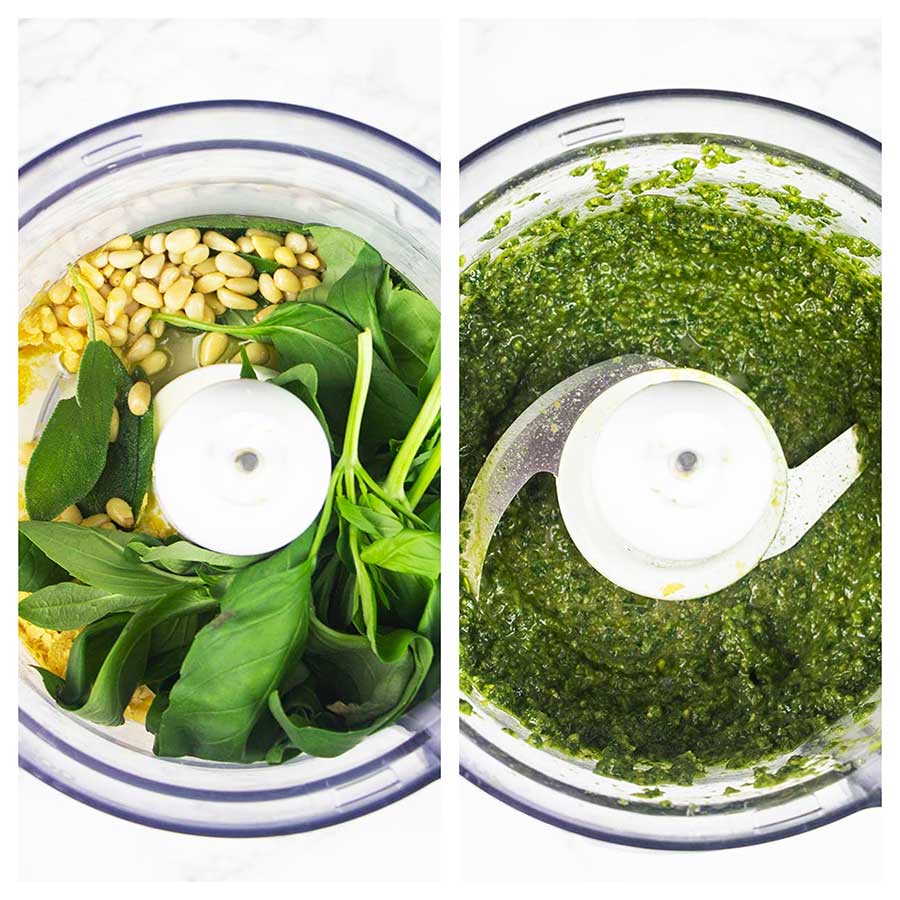 Add broken risoni or orzo or broken spaghetti into the soup and continue to cook for 8-9 minutes so that the pasta is al-dente. Stir through the fresh herbs.

Serve in bowls and spoon over the pesto. 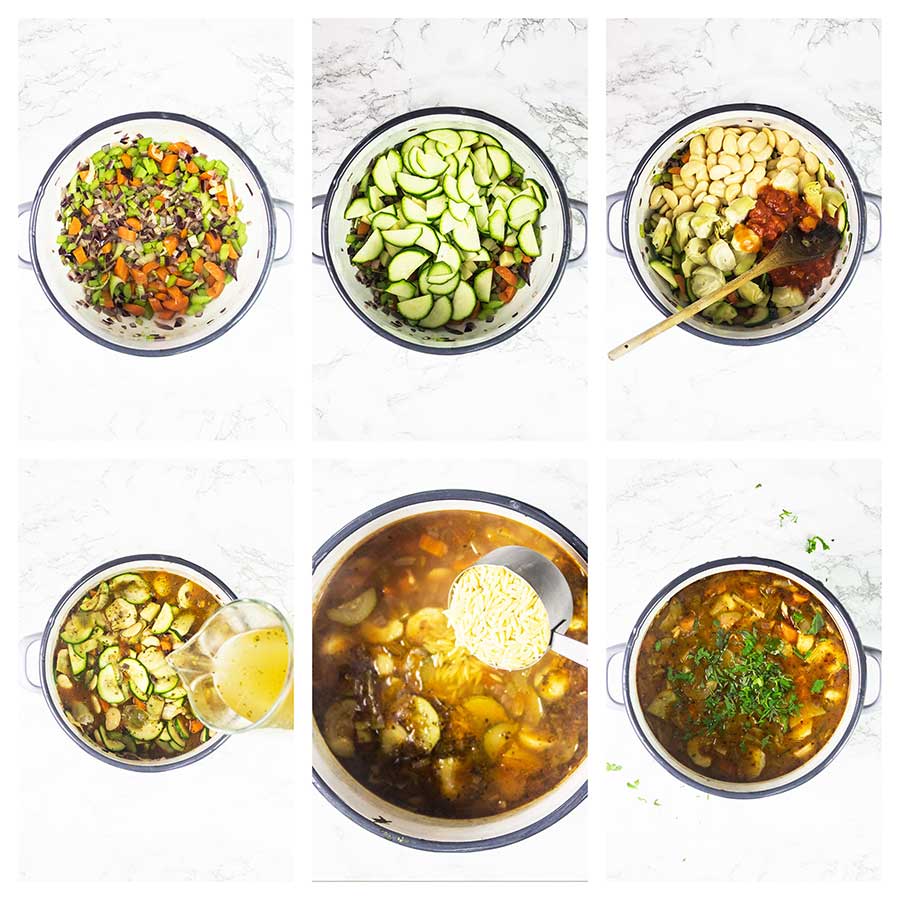