Juicing pineapple is easy. Pineapple juice is sweet and full of tropical flavour. There are many reasons why pineapples should be part of your weekly routine either by eating them whole or by juicing them.

With this easy homemade pineapple juice recipe with coriander/cilantro and chilli we use only three ingredients that deliver a sweet, savoury and spiced drink that alkalises your body, revitalises your body and totally refreshes.

Coriander leaves, aka cilantro bring a wonderful spicy perfume that compliments the sharp sweetness of the pineapple and we introduce a slight warm spice from a little mild red chilli. Add more if you like it hot. 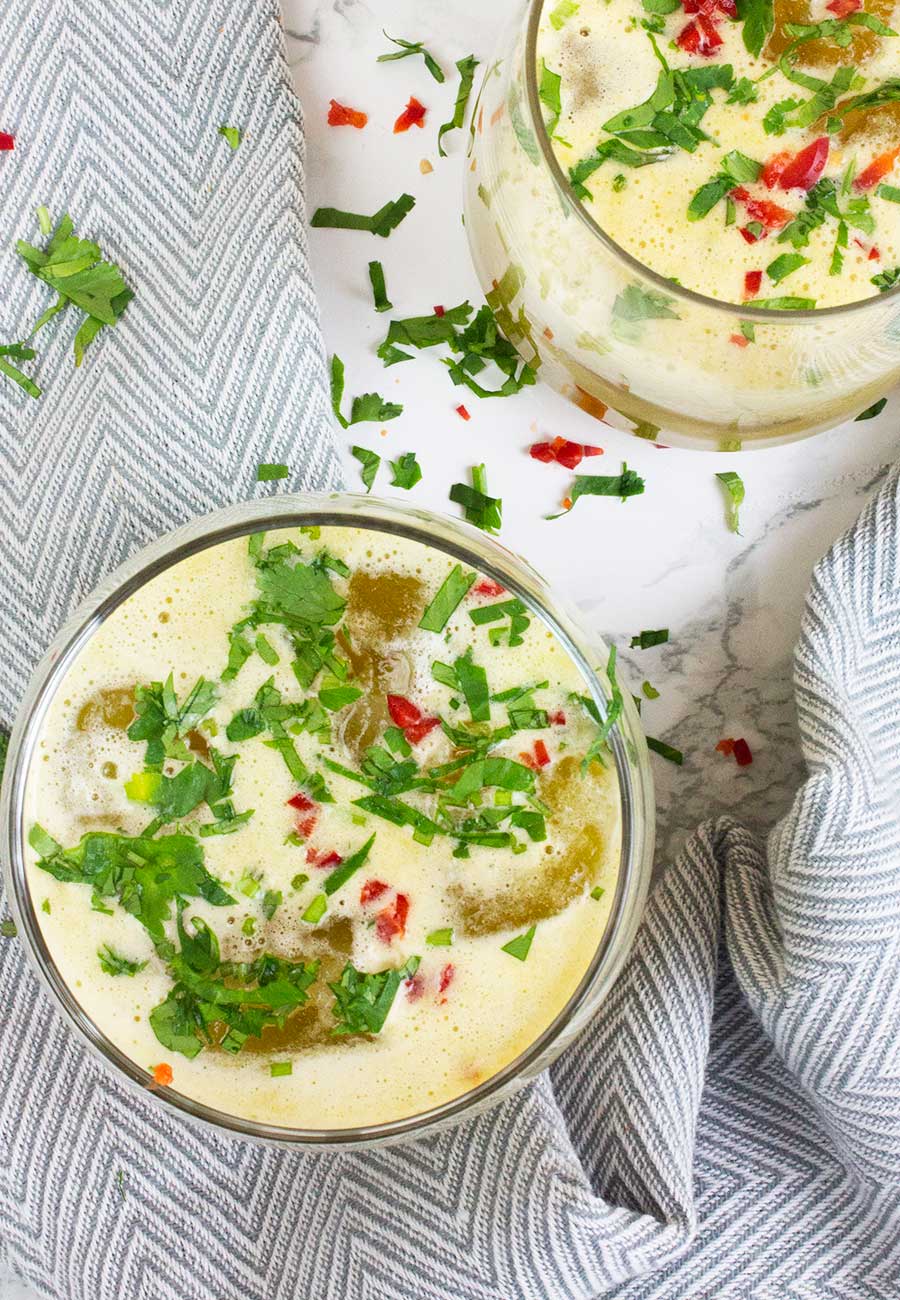 Juicing pineapple is really easy and helps use up older fruit from your basket. Whilst scientific research has not fully backed that juicing pineapple can deliver the fruits nutrients straight into your system to be absorbed more easily, the juice of fruit and vegetables do contain the most phytonutrients, vitamins and minerals. By potentially giving these nutrients a more direct route into the body these concentrated plant compounds could potentially lower the risk of cancer and other chronic diseases. 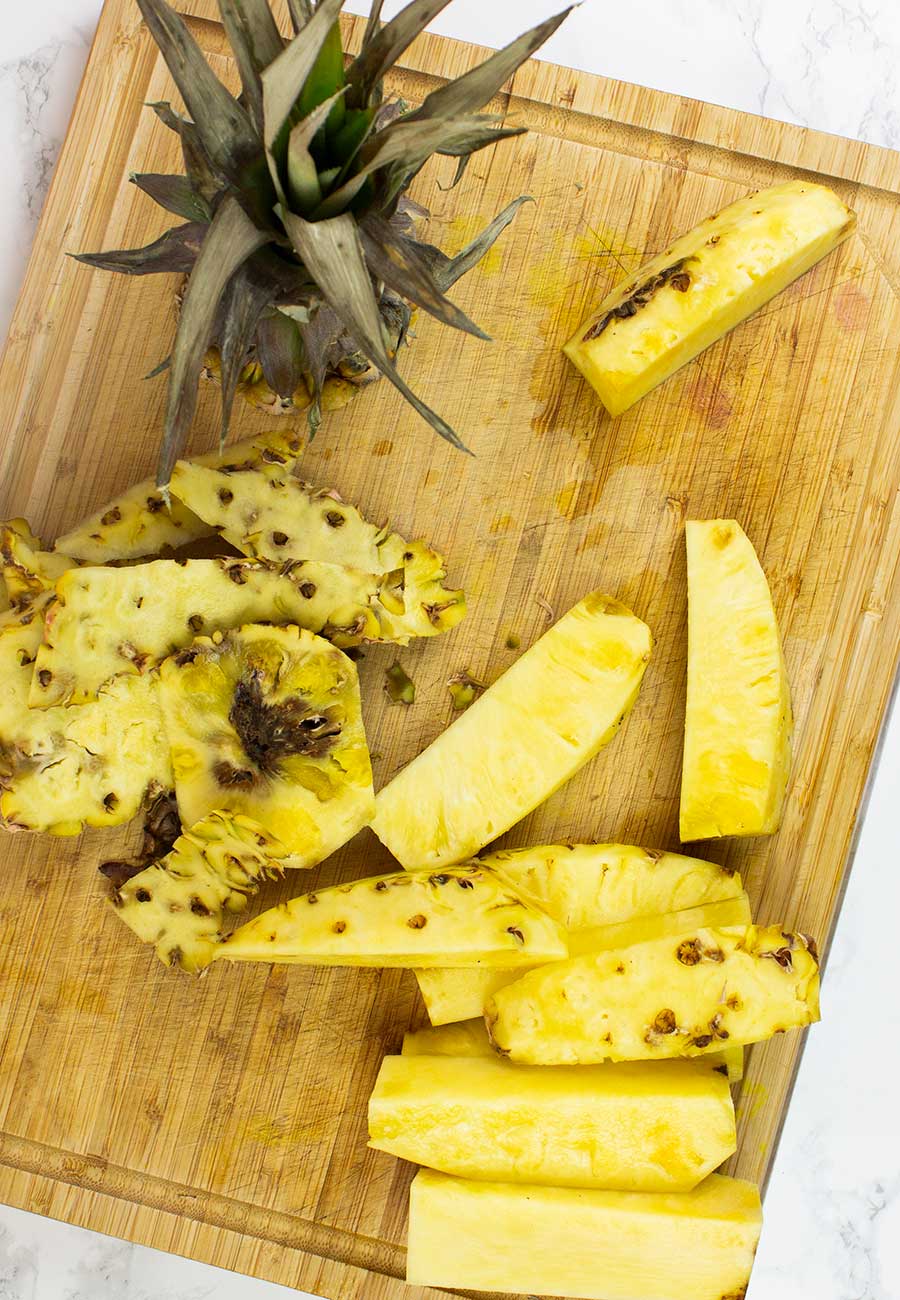 To help you detoxify and boost your immune-system consuming the whole fruit or vegetable is certainly recommended as you keep in all the fibre but of course juicing is another way to add fruits and vegetables to your diets and especially helps children who may not normally like to eat fruit.

Another reason to juice is to create amazing flavours easily consumed that is simply not possible by blending or eating the whole food. With this recipe you can introduce the wonderful aromatic nature of coriander which traditionally flavours savoury foods such as curries or salsas. The essential oils in the leaves are also full of antioxidants and juicing these leaves passes all that flavour into the pineapple. Chilis are also full to the brim with anti-inflammatory compounds and studies have also liked capsaicin, the ingredient in chilis that gives them their heat, to the slowing down of the growth of cancer cells and metastasis. Chilis could potentially have a bright future fighting diseases.

Pineapples are very acidic fruits and are about a 3 or 4 on the Ph scale but don’t let that fool you as they are a good ingredient to form part of an alkaline diet. Chilis which are in this pineapple juice recipe too, act in a similar way. Why does alkalising help with your health? Even though pineapples are acidic they are healthy when your body metabolises /converts them into energy. This chemical reaction leaves behind metabolic waste and when all foods are metabolised they leave behind a waste that is either acidic, alkaline or neutral. When the residue or ash is left behind whatever its Ph level is will affect your body’s acidity. That is the more acidic you are the more susceptible you are to illness and disease. The more alkaline you are the more protected you are to potentially lower the risk of cancers and other acute illnesses. Meats are known to leave behind some of the most acidic ash but pineapple is one that leaves behind a very alkaline ash. 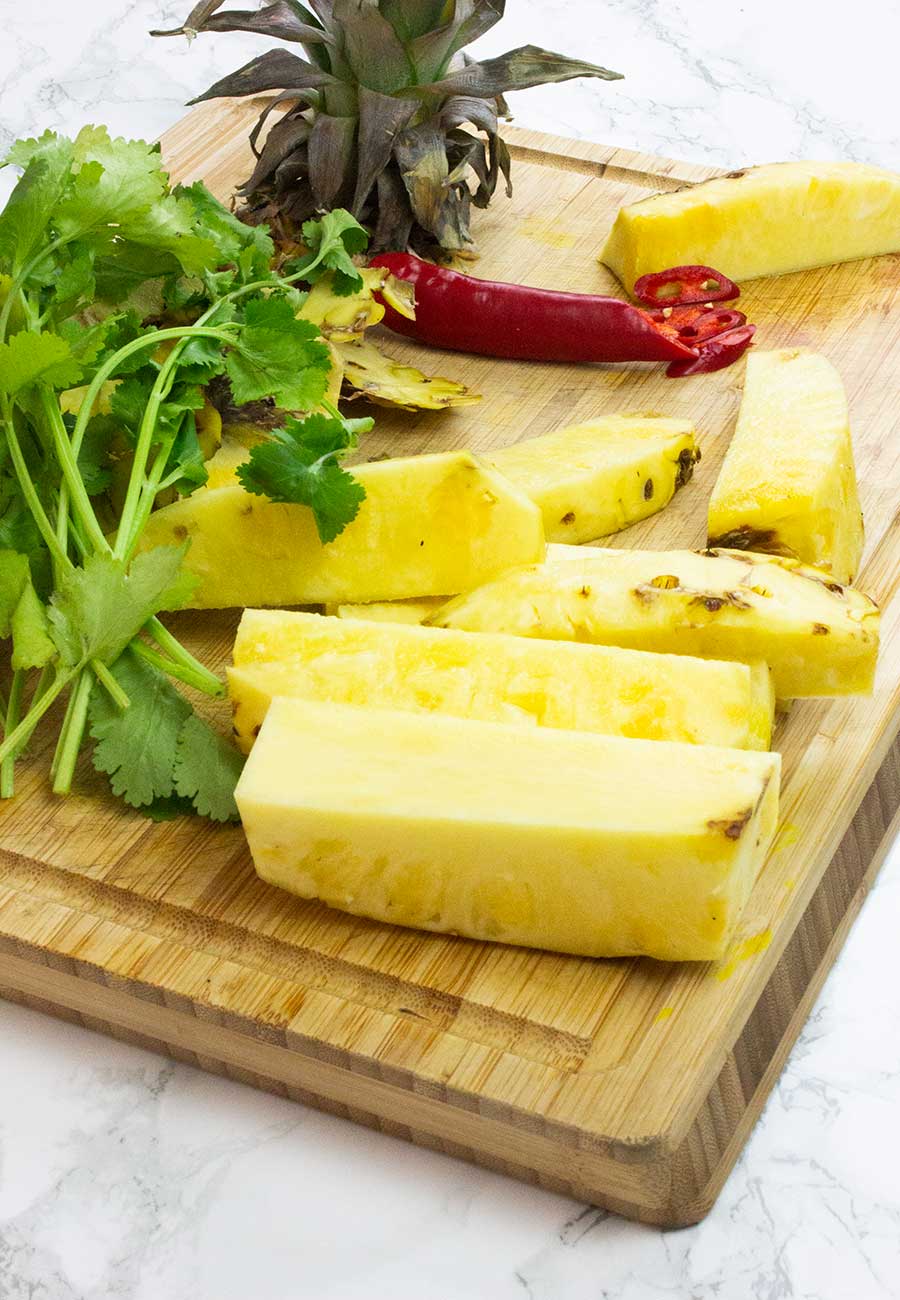 One of the major health benefits to pineapples is that they are nutrient dense. They are also very low in calories but high in Vitamin C which is a powerful antioxidant that is needed for at least 300 metabolic reactions including the production of collagen which is a major structural protein in the body. Collagen is essential for the growth and repair of healthy skin, bones, teeth and reproduction. Vitamin C not only regenerates other antioxidants such as Vitamin E it helps absorption of Iron and has numerous other benefits such as protecting cholesterol against oxidation as it is only oxidised cholesterol that is associated with the hardening and furring up of arteries. Studies have also suggested that people with the highest intakes of Vitamin C are less likely to develop certain cancers.

A lack of Vitamin C could result in the higher susceptibility to colds and coughs, poor healing, prevalence to bruising, hair loss, dry lips, inflamed, bleeding gums and lethargy. A good reason to consume pineapples.

Vitamin C also has antioxidant qualities too but pineapples are high in other antioxidant plant compounds too such as flavonoids which give the fruit its bright yellow colour. Antioxidants help balance the damage caused to cells from oxidative stress in the body caused by free radicals. One of these compounds is the group of digestive enzymes called bromelain. Studies have shown that bromelain may also help fight certain cancers such as breast, skin and colon amongst others by suppressing the growth of mutating cells and stimulating cell death. These studies have also linked bromelain to potentially stimulating the immune system to produce molecules that could make white blood cells more effective at suppressing cancer cell growth and eradicating cancer cells. 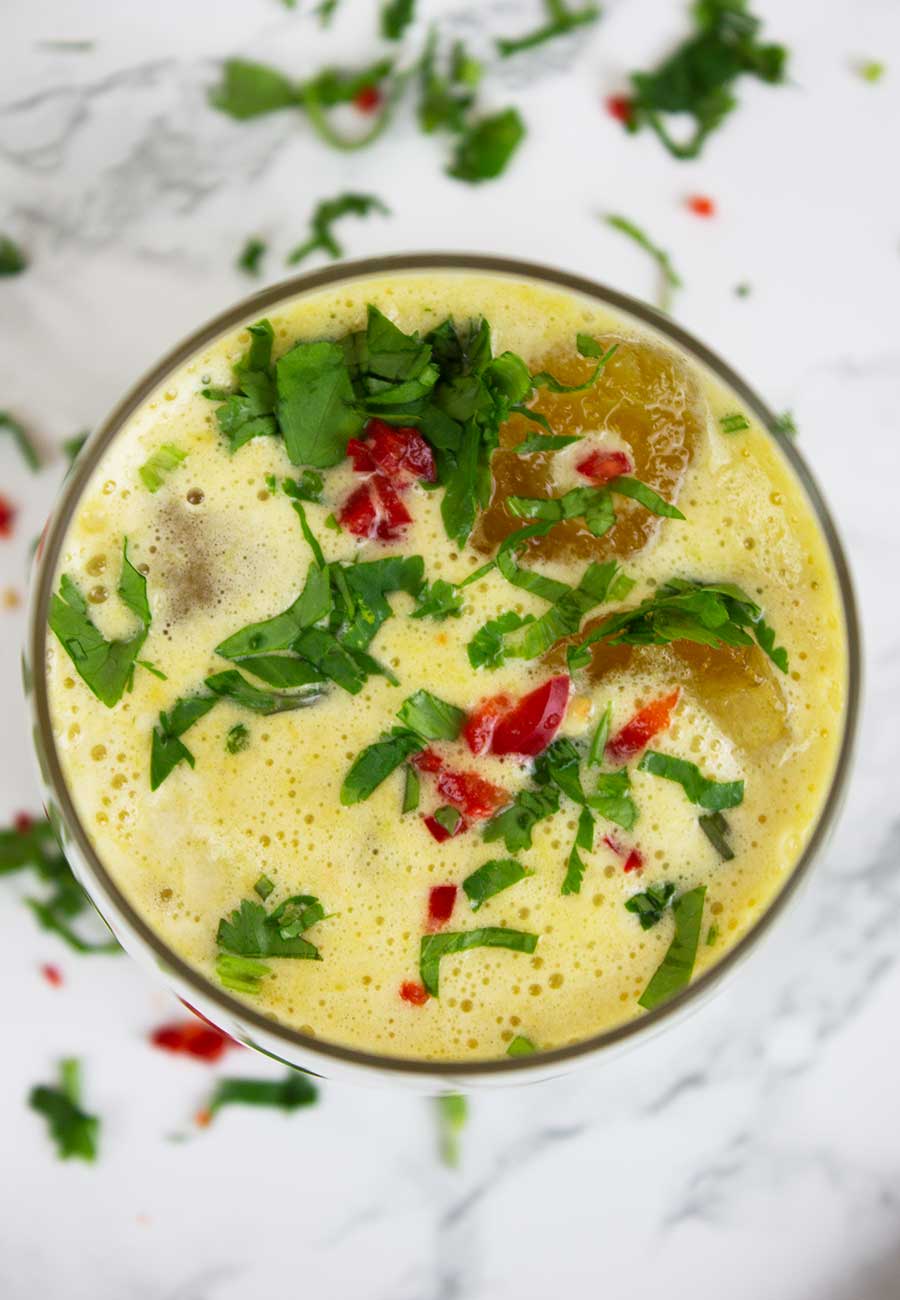 Coriander possesses a few interesting qualities including that it appears to help flush out excess sodium from the body, this has a knock on effect of lowering high blood pressure and bad cholesterol levels, this makes it a heart healthy herb. The leaf of coriander also contains a compound called Dodecenal which has antimicrobial effects on pathogens meaning that it could potentially fight bacterial infections. Other qualities that this herb has are also down to its antioxidant capabilities too which studies have been carried out to see the effect coriander has against inflammation in the brain and other cellular damage associated with aging skin. In fact one study suggested that coriander extract was almost as effective as diazepam, a common medication used to treat anxiety. Other brain ailments such as Parkinson’s, Alzheimer’s and multiple sclerosis are linked with inflammation and the effects of coriander could potentially safeguard against illnesses like these.

Chillies/chilis have been studied for their health benefits. We know about capsaicin but chilis also have numerous other antioxidant compounds which could potentially stave off acute illness. Carotenoids are the polyphenols such as flavonoids that give fruit and vegetables their distinctive colours. A bright red chillis carotenoid content is made up of about 50% capsanthin which is also a potent antioxidant. Chilis can be very hot and like anything that has an effect of this nature has to be moderated. With this recipe we have used only a mild chilli pepper such as an heirloom chilli from European countries like Spain, France and Hungary which are spicy but not too high on the Scoville unit (the measurement of how hot a chilli is) or piquillo peppers which have a mild zing. If you want hot then it is entirely down to you. 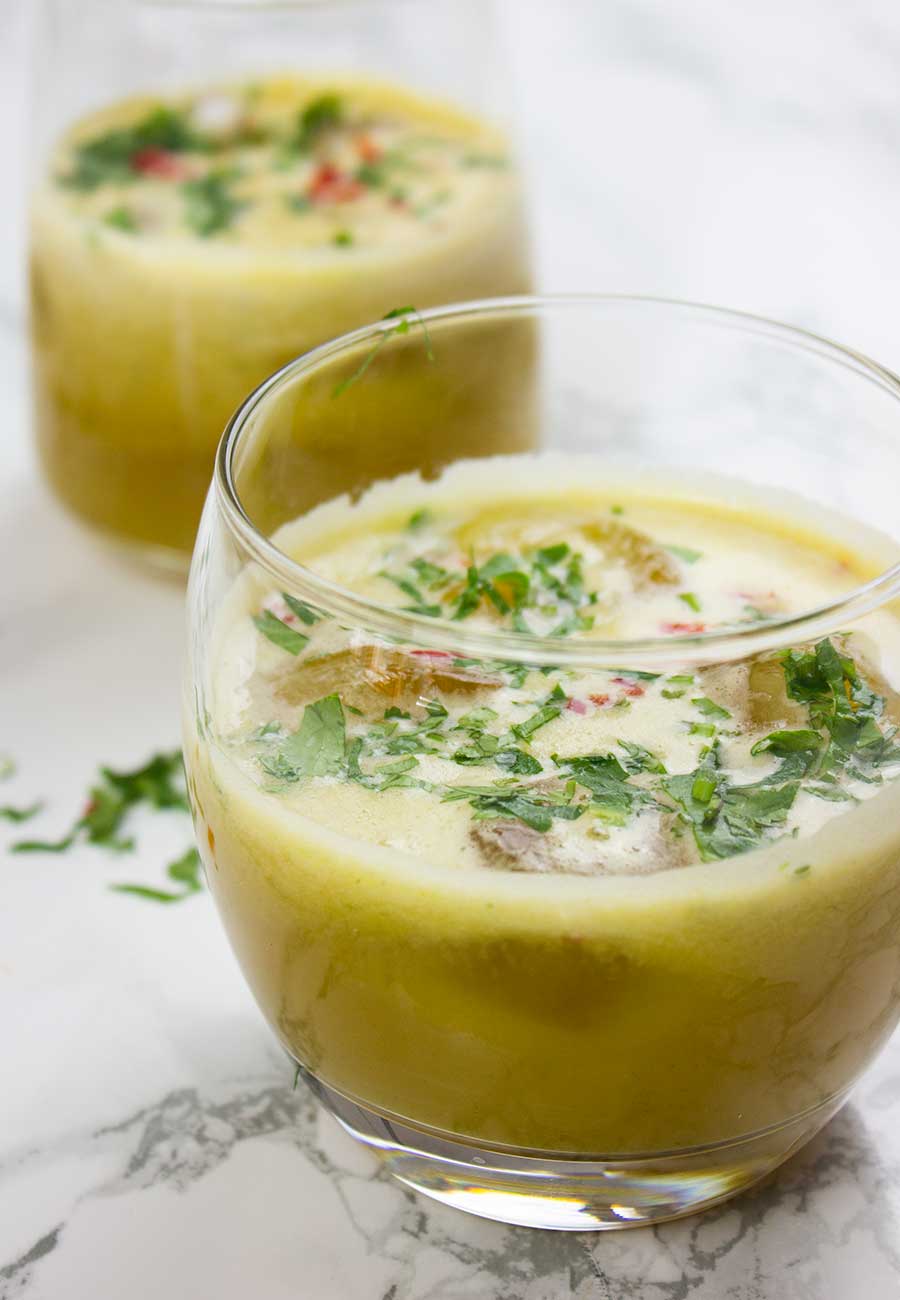 One pineapple believe it or not really only contains about enough juice for two people however it is certainly worth it with this pineapple juice recipe, especially if your pineapples tend to stay in your fruit basket for longer than you intend. The juice is really good too, fresher than shop bought and you get to put in these extra beautiful flavours that you can’t just buy in the shops. However if you want to pad out the recipe, then add apples or oranges for extra juice, or try sassing it up even more with ginger.

For those who don’t like coriander/cilantro, and we know that there are many of you out there, then substitute the coriander/ cilantro for either mint or a sweet basil like Thai basil. This is just an awesome recipe you should try.

Have you been juicing pineapple with coriander and chilli? 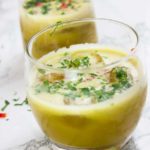 Cut the pineapple into lengths that fit in your juicer, squeeze the coriander together with half of your chilli and place in the juicer first and press them down with the pineapple.

Garnish with the remainder of the chilli finely chopped and a little of the coriander leaves.

I have tried two of your juices in the last week and here is my review on “JUICING PINEAPPLE WITH CORIANDER AND CHILLI RECIPE Serves: 2 Prep Time: 5 min” – It was really tasting surprisingly refreshing with a little kick, I think we could of gone hotter so may continue experimenting with this one. Depends on what you want from a drink.