Delicious mushroom pȃté recipe that is healthy and flavoursome. This easy vegan pȃté is rustic as well as elegant and is the perfect dinner party appetizer.

Pȃtés are a traditional tasty spread welcomed on the dinner table served with a fresh baguette or toasted slices of ciabatta or sourdough. Famous meat versions are the forerunners for the many beautiful vegan and vegetarian versions which are ever so tasty, simple to prepare, and either elegant or rustic to serve up. Our best ever mushroom pȃté or mushroom parfait is amazing served as part of a table of antipasti such as olives, grilled and marinated vegetables washed down with a nice glass of wine, or as an integral aspect to a ploughman’s lunch with a hunk of your favourite vegan cheese and oodles of tangy pickles. Of course, you can go for the sophisticated option by serving it as an elegant appetizer with lightly toasted slices of vegan brioche and sweet onion marmalade. In France, the famous Foie Gras is accompanied by a chilled sweet sauterne dessert wine. 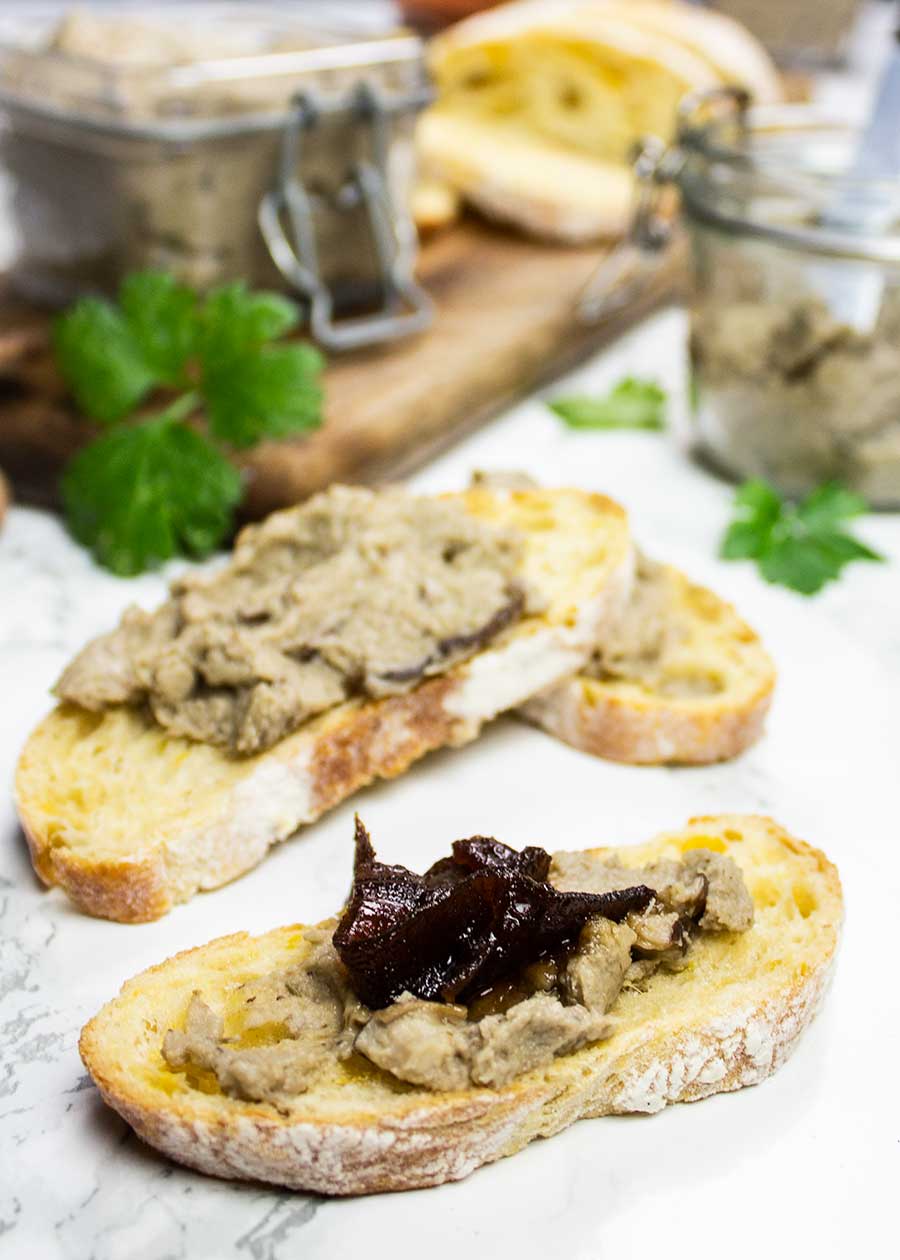 With this firm but easily spread mushroom pȃté we have taken the inspiration from a classic liver parfait which is very smooth and almost sweet to taste but added a firmer dimension that you would normally associate with a terrine (which is baked in a mould with whole slices and vegetables) by adding some coarsely chopped mushrooms and Agar Agar which is a seaweed gelling agent that is often used in Japanese cuisine to set puddings like jello/jelly.

Having not always followed a plant-based diet we know how an original dish should not only taste like but importantly what the texture should be like too and as we are using purely plant-based produce we find that using agar-agar gives the mushroom pȃté a texture very much like a traditional pȃté such as a Brussels or Ardennes pȃté.

For a rich and deep flavour that also has sweet notes we use a mix of exotic and woodland mushrooms such as meaty shiitake, earthy chestnut mushrooms and some oyster mushrooms. This mushroom pȃté deserves a depth of flavour so avoid your common button mushroom. However, feel free to experiment with other mushrooms. If you live in an area where you can easily obtain girolles, ceps or even the much-prized chanterelle then absolutely fill it to the brim with these tasty morsels.

Pȃtés, of course, will have other flavours shining through that give them their uniqueness. For example, a Forestiere pȃté will use mushrooms to give it its special flavour or liquor is added such as cognac or port to give certain pȃtés more of a deep flavour. As such we have used two wonderful Mediterranean flavours to add oomph to our mushroom pȃté which are roasted sweet garlic cloves and marinated artichokes which play an important part in an Italian antipasti selection.

Lastly, you have a plethora of fresh or dried herbs that you can add to create a certain vibe to your mushroom pȃté. We have opted to use the gorgeous flavour of thyme which pairs so well with mushrooms but you could just as well use dill to impart a Scandinavian feel to your dish, rosemary for a more woody, autumnal feel or sage, basil or oregano to bring out the Italian flavours. Just to remember to add a little more umami by including a little soy sauce which will also add a lovely salty hit too. All of these ingredients not only work ever so well together in regards to taste pairings but they are all incredibly healthy too. Mushrooms are full of antioxidants as are fresh green herbs. We will talk more about their health benefits below.

How to make a mushroom pȃté

The technique to make this is also very simple. First of all roast your mushrooms along with the artichokes to intensify their flavour then remove about ½ a cup to ¾ of a cup of the mushrooms to chop and add at a later stage. Process the rest of the mix in a high-speed blender with a little soy milk and some vegan cream cheese for a smoother texture. Mix the chopped mushrooms back into the mix.

Now it is time to add the Agar Agar. Place the mix in a pan over medium heat and sprinkle on two tablespoons of the Agar Agar flakes. Leaving the mixture at this point will allow the flakes to slowly dissolve on top of the pȃté which can then be stirred gently through. This will help the paste gel well for a firmer texture.

As you have made the pȃté firmer, you can put it into a terrine mould so that you can serve slices of pȃté. Alternatively, you can store in a sealable jar and serve that way. 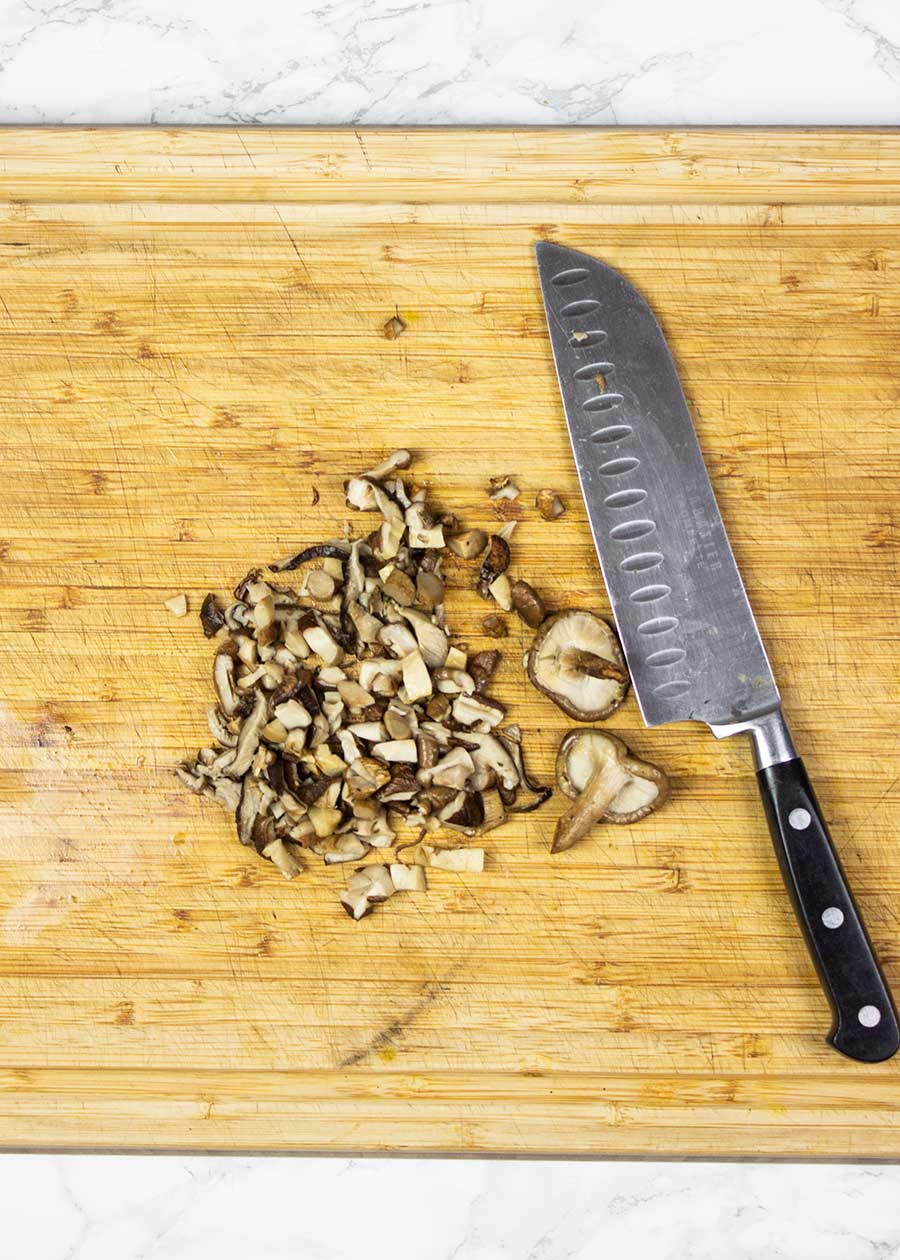 Mushrooms boast quite an impressive cv of health benefits. They contain a high amount of selenium which has recently been considered as one of the most important trace elements in your diet and a powerful antioxidant. Selenium is beneficial to maintain normal cell growth and also enhances the potency of the liver enzyme P450 which detoxifies carcinogens in the body. In countries that have low levels of selenium which is present in soil, they have been documented to have incidences of cancer increased by as much as six times. Mushrooms also contain a powerful compound called Lentinan which is known to fight cancer-causing agents. Lentinan is also an approved drug provided for cancer patients in the far east.

Other mushrooms to try when making pȃté

Lion’s Mane, which grows in clumps on the sides of trees, has a meaty flavour and texture not too dissimilar to lobster or crab which is perfect for a stir-fry.

Hen of the woods resembles a cluster of oyster mushrooms and are prized for their medicinal advantages. When flattened and cooked this type of mushroom is often prepared as the vegan version of a steak.

Portobello mushrooms are the fully grown version of a button mushroom and are much meatier. They can turn foods a wonderful deep dark colour and is ideal in a pȃté.

King oyster mushrooms are beautifully firm to the bite and exhibit excellent flavours as does its smaller counterpart the oyster mushroom but do not become so wet when cooked so is also an excellent option.

Chanterelles have a unique flavour and are perhaps the most prized of all mushrooms. With their sweet, peppery flavour these mushrooms need to be treated as the star of the show.

Morels are also prized in culinary circles. They have a deep flavour and spongy texture and generally used to accompany dazzling dishes, their coral-like appearance also captivates so you would be very lucky indeed to be able to use this fungus in a home comfort food. 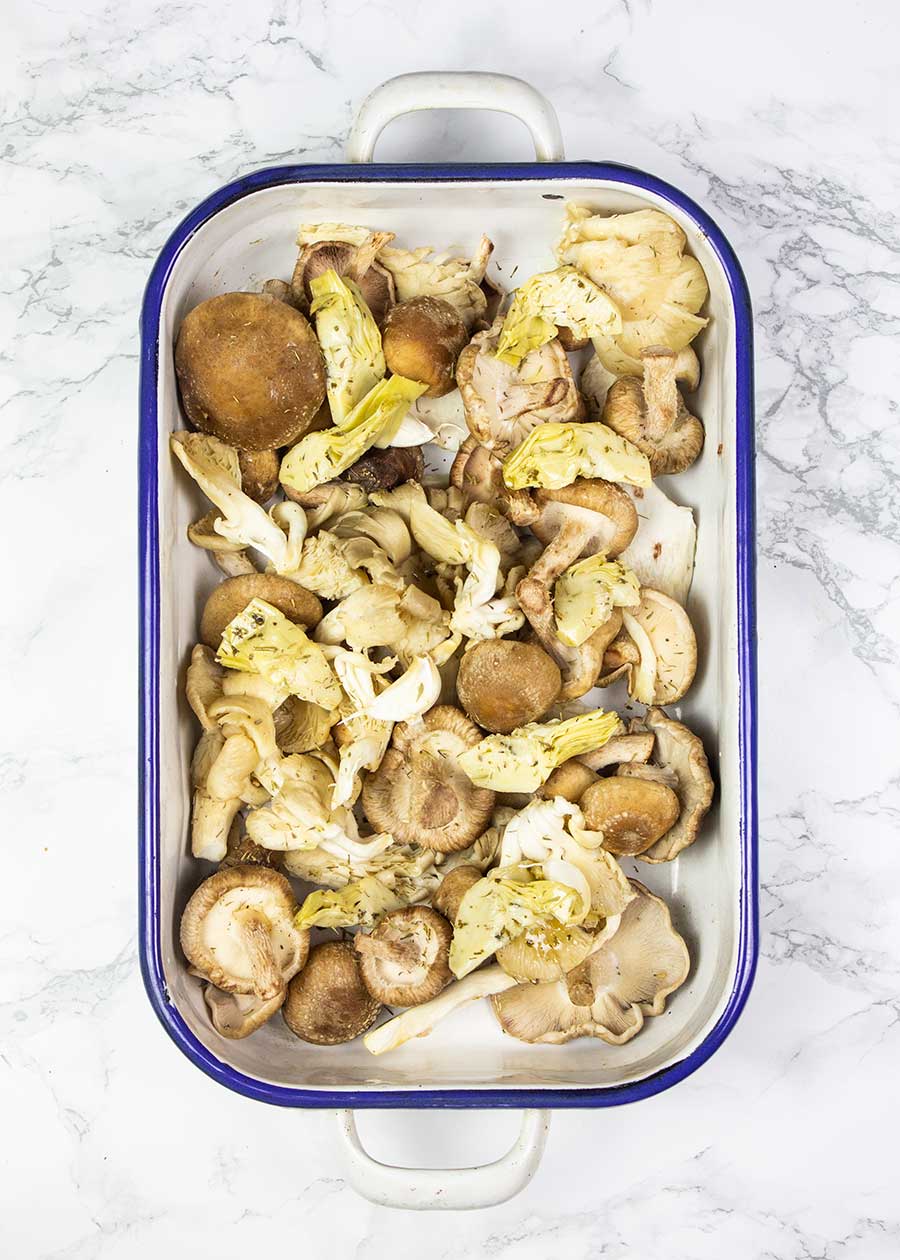 Not only do artichoke hearts add another Mediterranean dimension to this mushroom pate, these low in fat but high in fibre hearts add a great dose of nutrition too.

Artichokes are increasingly used as supplements as they contain much of your recommended daily intakes of Vitamin C, Vitamin K, folate and magnesium. ½ a cup of marinated artichokes contains about 30% of your recommended daily intake of fibre, which is heart-healthy as it helps ferry toxins out of the body. Another reason people take artichoke extract as a supplement is because it can detoxify the body too by helping to stimulate the production of bile in the liver which also removes harmful toxins.

Artichokes, due to their antioxidant content of rutin, quercetin and silymarin have shown to have anticancer results on cancer cells in test tube studies.

The last ingredient to add a depth of flavour to this mushroom pȃté is roasted garlic which has often been associated with a healthy lifestyle. It has been prescribed for generations and even since ancient Greece where Hippocrates, the father of western medicine often used garlic to heal ailments. His tenet, let food be thy medicine and medicine be thy food lives on today.

Historically, garlic was used purely for its medicinal properties but because it is so distinctive with an amazing taste and delicate spice it is a staple ingredient in everyday cooking and cuisines all around the world. When roasted much of the health benefits are actually increased too. 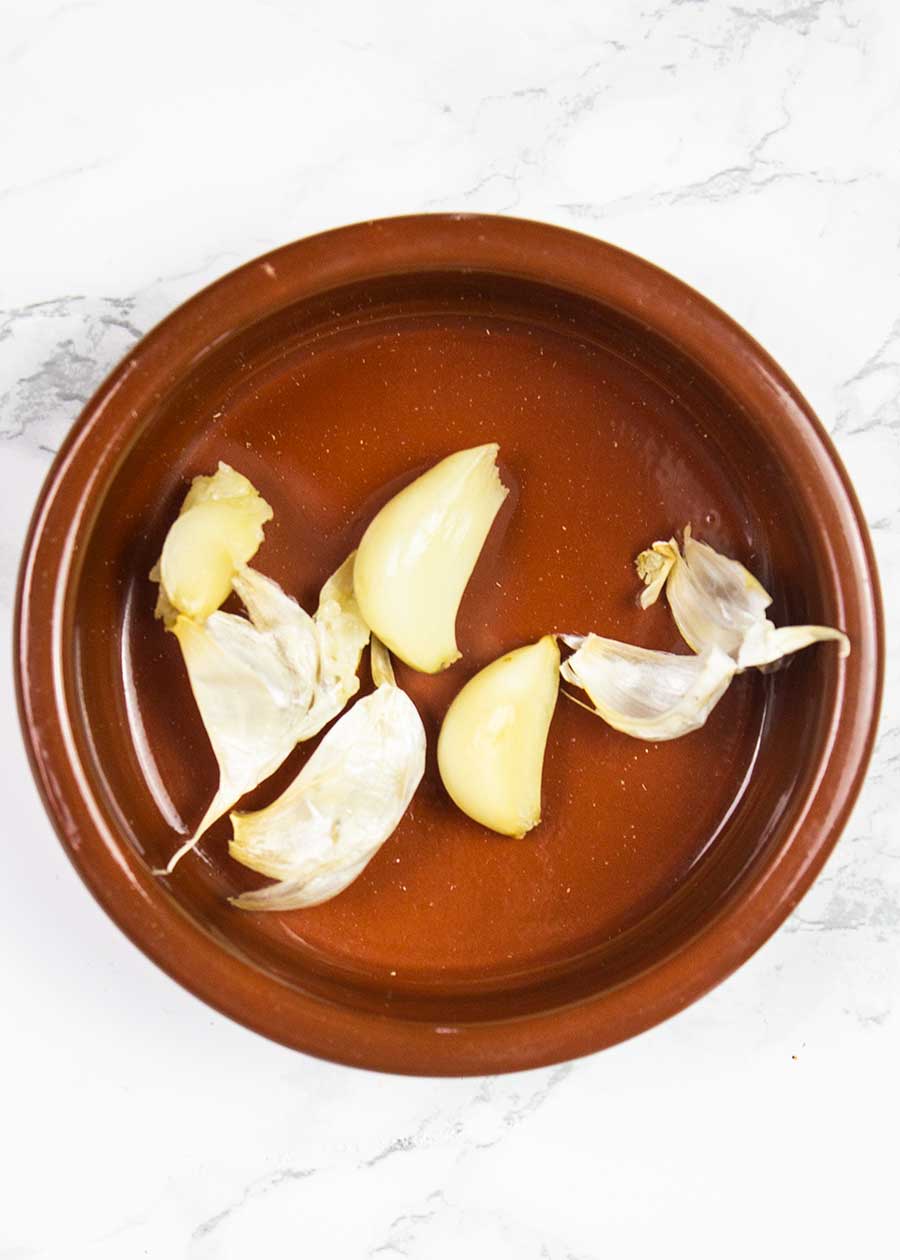 Garlic is highly nutritious and like onions, they come from the same allium genus. They contain a small amount of much of what you need in your diet. One of the main health benefits of garlic is down to its high concentration of Vitamin C. Studies have shown that diets rich in Vitamin C help people maintain an effective immune system. Garlic has long been known to help ward off illnesses such as the common cold and flus. It is also used to aid the healing of minor wounds and infections too due to its antifungal ability too.

Spread a little bit of joy that’s healthy and tasty.

Have you made this recipe? 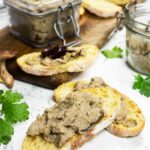 Put the mushrooms, garlic cloves, artichoke hearts and thyme in a roasting tray and roast in the oven at 200°C (390F) for 35 minutes.

Remove the tray from the oven and take out ½ to ¾ of a cup of mushrooms and roughly chop them and set aside.

Remove the skins from the garlic and place them in a high-speed blender along with the rest of the ingredients in the roasting tray, soy milk, vegan cream cheese and soy sauce. Process until smooth.

Transfer the paste to a pan and stir in the coarsely chopped mushroom.

Sprinkle over the Agar Agar flakes and on the hob gently heat the mixture. When the flakes start to melt, lightly stir to fully combine the mixture together. Remove from the heat.

Transfer into a terrine mould lined with clingfilm or into sealable jars and place in the fridge until cooled and set. 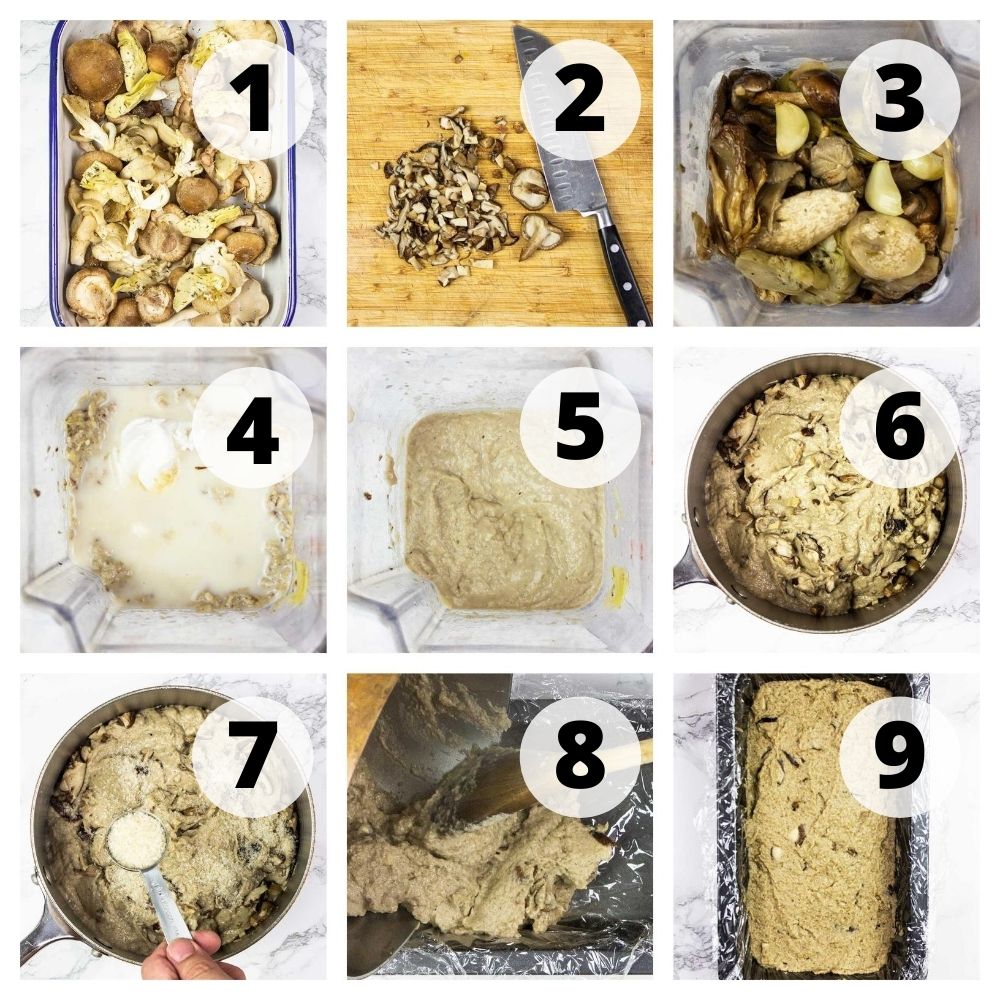